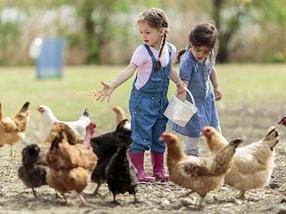 Children who live on farms -- where they are exposed to sources of environmental bacteria such as livestock and dusty barns -- are less likely to develop asthma.

Efforts to improve the health of children at increased risk for asthma will receive a major boost with the launch of a new University of Arizona Health Sciences-led, federally funded national clinical study. For Fernando D. Martinez, MD, and his colleagues at the UA Asthma and Airway Disease Research Center, this study follows 30 years of research to prevent and cure this chronic disease.

"Asthma is a disease that affects 10 percent of all children in the U.S., significantly impacting their ability to thrive," said Dr. Martinez, who will lead the nationwide research effort. "With this new study, we have the opportunity to identify children at the earliest stages of life who are at highest risk for disease and initiate early therapies to minimize respiratory tract illness. Following these children during the preschool years will further enhance our understanding of the disease, provide additional precision approaches to therapy and lead to optimal prevention strategies, and - hopefully - a cure."

Based at the UA Health Sciences' Asthma and Airway Disease Research Center, the study will enroll more than 1,000 babies, 6 to 18 months old, who are considered at high risk for developing asthma. High-risk factors include having a parent with asthma or a diagnosis of eczema, or both.

Infants will be randomly assigned to a treatment group that receives the preventive medicine - a bacterial extract - or a control group that gets a non-active placebo treatment. The medicine will be administered over two years. In the third year, researchers will document whether the babies who received the medicine have fewer asthma symptoms than those who received the placebo.

Years of research by Dr. Martinez and colleagues have shown that exposure to environmental bacteria in children under the age of 6 actually can strengthen the child's immune system and reduce the child's risk of developing asthma. Other studies compared asthma rates in children who live in relatively microbe-depleted urban homes to those who live on farms, where they are exposed to livestock and dusty barns. Those children are much less likely to develop asthma than their urban counterparts.

Dr. Martinez became familiar with a naturopathic powder developed in the 1970s in Switzerland. A study had shown the powder, mixed with juice and given to preschool children, decreased wheezing illnesses, which often are the first manifestation of asthma in early life.

"If we could prevent those illnesses, we may be able to prevent the alterations in the lung that predispose children for a lifetime of chronic asthma. The product also has a very good safety profile after decades of use in children as young as 6 months of age," Dr. Martinez said. "This could be transformational. For the first time this could give us hope that we can prevent this disease."

Understanding the genetic and environmental factors that cause asthma, and finding a way to cure or prevent the disease, has been the primary focus of Dr. Martinez's internationally respected research career. Growing up in Santiago, Chile, Dr. Martinez remembers when he was 3 years old watching his mother struggle to breathe during a severe asthma attack. His mother's attacks continued, and so did his fear of losing her to the disease that made it so hard for her to breathe.

"I remember vividly, it's kind of ingrained in my brain, that I promised to myself that I would cure this disease one day, or better yet, find a way to keep it from happening in the first place," Dr. Martinez said.

Said pediatric pulmonologist Wayne Morgan, MD, principal investigator for the UA portion of the study: "Researchers across the world have tried to prevent the development of wheezing illness and asthma for decades. However, studies either reducing or increasing exposures to allergens early in life or using probiotics such as lactobacillus have had disappointing results and likely are not the way forward. Our current study seeks to stimulate the immune system in a safe manner in early life to prevent wheezing illness and, hopefully, the later development of asthma."

UA President Ann Weaver Hart, PhD, said, "the University of Arizona is laser focused on research that creates positive impact by bringing the best minds and the latest technology to bear on curing disease and improving health around the world. The work of Dr. Martinez and his colleagues is a wonderful example of how the creativity and insight of UA scientists spans across continents and disciplines, and I am so proud that they are working to better understand and - we hope - find a cure for a debilitating disease."

Joe G.N. "Skip" Garcia, MD, UA senior vice president for health sciences, said, "the Asthma and Airway Disease Research Center team is going to catapult our understanding of the disease, including the genetic and environmental factors that cause asthma. Dr. Martinez and his colleagues have the scientific expertise and the personal passion to end asthma in our lifetime. This study and the national scope of the clinical trial moves us toward a population health perspective in asthma research."