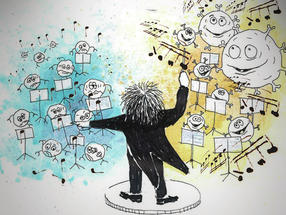 By modulating the pathway which produces BH4 scientists can in essence control T cell responses. 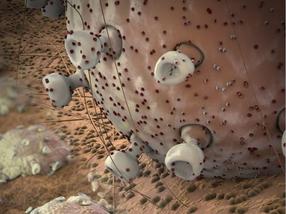 Tetrahydrobiopterin, or BH4, is needed to produce the “happiness hormone” serotonin or dopamine. Also, it critically controls the growth of T-cells by regulating iron and mitochondrial metabolism.

Scientists at IMBA - Institute of Molecular Biotechnology at the Austrian Academy of Sciences - together with the Boston Children's Hospital at Harvard, demonstrate a completely new way of combating autoimmune diseases and cancer.

For decades researchers have been trying to unravel the complex mechanisms of our immune system. Insights gathered have paved the way for a new era of cancer therapy. If our immune system is activated, the body is able to defend itself against cancer cells and invading pathogens. This approach has revolutionized cancer therapy and resulted in this year's Nobel Prize for Medicine. An international research team led by Josef Penninger at IMBA, Vienna, and Clifford Woolf of the Boston Children's Hospital, Harvard University, now report entirely novel insights into the biology and activation of immune T cells.  The authors also show that this new pathway for T cell activation is druggable – to either block multiple autoimmune diseases or to enhance anti-cancer immunity.

The surprising link between neurobiology and immunity

The researchers surprisingly found that a specific type of immune cells in our body, called T cells, require a molecule that was long known to play an important role in the nervous system. In the brain, this molecule, known as tetrahydrobiopterin, or BH4, is needed to produce the “happiness hormone” serotonin or dopamine. " T cells are the soldiers of our immune system and patrol our body “seeking out” pathogen-infected cells or aberrant cells that could become tumors. As a result of such encounters, the T cells are activated, they proliferate and enter “combat mode” to fight danger tour body. A reoccurring problem: Activated T cells can be directed against the body's own cells – leading to allergic reactions and autoimmune diseases such as colitis, asthma, multiple sclerosis, arthritis, or certain skin diseases. In the last years, the critical pathways of T cell activation have been elucidated, allowing for the developmental of multiple groundbreaking therapies. The international research team now reports in Nature that BH4 critically controls the growth of T cells by regulating iron and mitochondrial metabolism. This also now explains the old findings that people with iron deficiency or anemia often suffer from immune problems.

“One fascinating feature of our discovery is that a system that is actually known in neurobiology for decades can play such a key role in T cell biology," says Josef Penninger, founding director of IMBA. "This finding links two completely different systems in our body and is unlike previously known 'immune checkpoints'. For me as a trained immunologist who was involved in defining some of the key signaling pathways in T cells, like CTLA4, it was truly amazing to find such a critical new player in T cell biology – and since it regulates not early activation but how T cells grow, the possibilities for medical applications are extremely varied: from controlling autoimmune diseases, asthma and allergies to having a new way to trigger anti-cancer immunity! "

"Autoimmune conditions and allergies are among the most common diseases worldwide and therapies are urgently needed. In this context, our discovery can be very useful. By inhibiting BH4 we can “tame” these auto-aggressive T cells so that they do not destroy healthy tissue or cause chronic inflammation, " says Shane Cronin "says Shane Cronin, postdoctoral fellow at the IMBA and Harvard as well as first author of the current publication in Nature.Together with Clifford Woolf of Harvard Medical School, and Kai Johnsson, Max Planck Institute for Medical Research, Heidelberg, the researchers developed a novel drug called QM385, which inhibits BH4 production for future clinical use. Using multiple models, treatment of mice with the BH4 blockers indeed “calms” auto-aggressive T cells and abrogates T cell-mediated allergic inflammation and gut and brain autoimmunity. “I am very optimistic that we have the means to introduce a new and highly effective treatment strategy for multiple allergic and autoimmune diseases” says Clifford Woolf. “The beauty of the approach is that instead of targeting a single cytokine or class of T cells we halt proliferation in all disease related T cells and this could translate into activity across multiple diverse clinical conditions.”

BH4 is also an important candidate for future cancer immunotherapies, as activated T cells sense and fight cancer cells. Analyzing mice, the researchers discovered that higher levels of BH4 activate proliferation of T cells, causing tumors to shrink. Intriguingly, the research team now found that kynurenine, a molecule that can turn off the immune system in tumors, blocks T cell growth – which can be overcome by BH4, allowing T cells to escape local immunosuppression in the tumor environment. "We studied BH4 in pain perception earlier. This is a great example how different fields of research, working together, can make novel discoveries at the interfaces of different kinds of biology”’ says Harvard’s Clifford Woolf. “In our case, a molecule recognized as essential for many functions in neurobiology, is now identified as key for completely novel therapies – when we dial it down we block T cell proliferation in autoimmune diseases or asthma. When we dial it up, we can trigger T cells to grow and attack tumor cells, even under adverse conditions – and hence have discovered a new pathway to induce anti-cancer immunity, one that should greatly expand the effectiveness of the check-point inhibitors currently used". Since the researchers developed a potent and orally available inhibitor, this new concept can soon be tested in human patients.