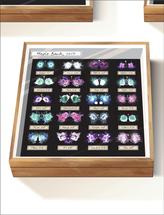 Genetic screens have revolutionized our understanding of biological processes and disease mechanisms. Recent technical advances have broadened the available approaches for disrupting gene function in a cell population prior to screening, from chemical and insertional mutagenesis to RNA interference, and, most recently, CRISPR-mediated genome editing. However, RNA interference and CRISPR-mediated gene targeting often suffer from poor efficiency and off-target effects. In addition, most mutagenesis approaches are not reversible – making it difficult to rigorously control for the frequent genetic and epigenetic differences between ostensibly identical cells. These issues can confound the reproducibility, interpretation and overall success of genetic screens.

Major concerns about scientific reproducibility and rigor have emerged in recent years. Amgen and Bayer, as well as The Reproducibility Initiative, have been unable to replicate many high-profile cancer studies. Indeed, it is not uncommon to obtain different results from experiments with the same cell line in two different laboratories. These inconsistencies can arise for various reasons. Regardless, irreproducible results waste money, damage the credibility of science and scientists, and delay or undo progress, including the development of effective therapies.

To overcome these problems, the Penninger lab at the IMBA developed a biobank of revertible, mutant embryonic stem cells, published in the current issue of Nature. This cell bank – called Haplobank - contains over 100,000 mutated, conditional mouse embryonic stem cell lines, targeting about 70% of the protein-coding genome (almost 17,000 genes). “Haplobank is available to all scientists, and represents the largest ever library of hemizyogous mutant embryonic stem cell lines to date. The resource overcomes issues arising from clonal variability, because mutations can be repaired in single cells and at whole genome scale,” explains Ulrich Elling, first and corresponding author of the current publication in Nature.

As a proof-of-principle, the authors performed a genetic screen to uncover factors required for infection with rhinovirus – the cause of the common cold. They discovered that rhinovirus requires a previously unknown host cell factor, phospholipase A2G16 (PLA2G16), to kill cells. Further, they showed that a specific domain of PLA2G16 is required for infection and may be an attractive drug target. Interestingly, PLA2G16 was also shown recently to be necessary for successful infection by related viruses, including poliovirus.

In another proof-of-principle screen, the authors leveraged the pluripotent potential of embryonic stem cells by differentiating them into blood vessel organoids. The formation of blood vessels (angiogenesis) is critical for development and for tissue maintenance, as well as for diseases like cancer. The authors screened candidate angiogenesis genes that were represented in Haplobank, and discovered multiple novel factors that affect blood vessel growth in organoids. Importantly, they observed a strong variability between independent clones, highlighting the advantage of repairable mutagenesis for comparing mutants with their genetically repaired sister clones.

“Haplobank can be used for screens to make entirely new insights into biology and health. Importantly - because gene knockouts can be repaired in our embryonic stem clones - this resource also enables well-controlled, robust and reproducible validation experiments. We feel this is a critical point and contribution, given the current efforts to improve the rigor of scientific research." Says Josef Penninger, IMBA Director and last author.