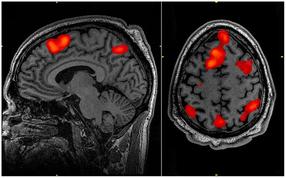 Researchers at the University of Arizona are developing a noninvasive brain-scanning technology that could produce images far superior to those obtained with the most commonly used systems -- electroencephalography and functional magnetic resonance imaging. The technique, which incorporates sound waves to measure electrical activity in neural tissue, could improve diagnosis and treatment of many disorders, including epilepsy, Parkinson's disease and traumatic brain injury.

"We know very little about how neurons act collectively to guide our thoughts, emotions and behaviors -- or cause seizures or mood swings," Russell Witte, associate professor of medical imaging, biomedical engineering and optical sciences said. "Functional magnetic resonance imaging and electroencephalography have provided some clues. But both fMRI and EEG share a major limitation: They produce images with poor resolution. We think our new technology could overcome that limitation."

Researchers have long known of the acoustoelectric effect, in which ultrasound energy alters a material's physical properties like electrical conductivity. Witte is one of the first researchers to apply the phenomenon to biomedical imaging. He has developed a noninvasive imaging technique for detecting irregular heartbeats and is working with Tech Launch Arizona, the UA office that commercializes inventions stemming from University research, to create a startup for acoustoelectric cardiac imaging.

With the new study, Witte takes his research into new terrain: the brain. He and co-investigators will develop and test the noninvasive technology, called acoustoelectric brain imaging, or ABI, on mammalian brains for the first time.

ABI involves applying ultrasound waves externally to the brain, where they interact with electrical currents to produce a "signature" wave that is picked up by an electrode attached outside the head. ABI can better localize the source of electrical activity than EEG, because it overcomes the problem of interference from the skull, and it works much faster than fMRI, which measures metabolic activity.

"Sensory input, thoughts and behaviors are happening so fast," said co-investigator and neuroscientist Stephen Cowen, UA assistant professor of psychology. "With speech or motor activity, many actions require split-second decisions -- actually, on the scale of tens of milliseconds. If a brain-imaging technology is working only in seconds -- fMRI, for example, can measure brain activity once every two seconds -- it may be missing some of the most important details."

Cowen added, "This is a very interesting adventure we're undertaking, because nobody knows what ABI will actually measure. Will it measure the activity of tens of thousands, or hundreds of thousands, of neurons? Will it detect the activity at a specific frequency, or at a range of frequencies?"

ABI could also provide a clearer picture of activity in structures deep in the brain, like the amygdala and hippocampus.

"There's an important diagnostic aspect to this, because if ABI can pick up abnormal electrical activity coming from these structures, it could reveal signatures for specific brain disorders, such as Parkinson's disease," Cowen said. "ABI could be a great technique for diagnosing traumatic brain injuries like concussion, or a noninvasive way to diagnose a seizure."

While still experimental, ABI technology could have many important clinical applications. For example, doctors might use it as an add-on device for an ultrasound machine.

Similar to how an obstetrician uses an ultrasound probe to see images of a fetus, a neurologist might hold the UA-created transducer to a person's head to see images of electrical activity in a particular neural circuit. A single electrode on the head would pick up the activity and convert it digitally in real time for projection on a display monitor, perhaps, or under a microscope.