Triggered by light, a novel way to switch on an enzyme 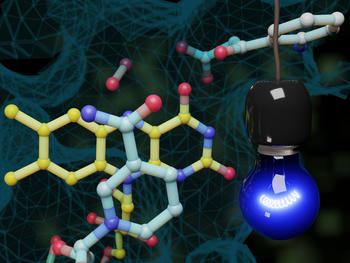 In the model: blue light triggers a special monooxygenase reaction in an enzyme. This kind of activation was hitherto unknown in enzymology.

In living cells, enzymes drive biochemical metabolic processes enabling reactions to take place efficiently. It is this very ability which allows them to be used as catalysts in biotechnology, for example to create chemical products such as pharmaceutics. Researchers now identified an enzyme that, when illuminated with blue light, becomes catalytically active and initiates a reaction that was previously unknown in enzymatics.

Enzymes: they are the central drivers for biochemical metabolic processes in every living cell, enabling reactions to take place efficiently. It is this very ability which allows them to be used as catalysts in biotechnology, for example to create chemical products such as pharmaceutics. A topic that is currently being widely discussed is photoinduced catalysis, in which researchers harness the ability of nature to start biochemical reactions with the aid of light. What they need for this purpose is enzymes which can be activated by means of light. It is not, however, a simple matter to incorporate the few naturally occurring light-activatable enzymes into biotechnological processes, as they are highly specialised and difficult to manipulate.

Researchers at the Universities of Münster and Pavia have now identified an enzyme which becomes catalytically active when exposed to blue light and which immediately triggers a reaction hitherto unknown in enzymology. The reaction in question is a special monooxygenase reaction, in which an oxygen atom is transferred to the substrate. The reaction is supported by a “helper molecule” which stepwise delivers two electrons. Up to now, it had been assumed that such a light-dependent reaction cannot occur in enzymes.

“The enzyme we have identified belongs to a very large family of enzymes, and it is realistic to assume that other enzymes can be produced, by means of genetic manipulations, which can be activated by light too and which can be used in a very wide range of applications,” says Dr. Steffen L. Drees, who headed the study and works at the Institute of Molecular Microbiology and Biotechnology at Münster University. One possible application, for example, is in the field of medicine, where pharmaceuticals could be activated by means of light.

In their study, the researchers investigated the enzyme PqsL, which is found in the opportunistic pathogen Pseudomonas aeruginosa and, originally, is not light-dependent. The researchers stimulated the enzyme with blue light and analysed the reaction using, for example, a combination of time-resolved spectroscopic and crystallographic techniques.

The enzyme examined belongs to the family of flavoproteins and – typically for this family of proteins – uses a derivative of vitamin B2 as a so-called cofactor for catalysing the incorporation of oxygen into organic molecules. The cosubstrate NADH (reduced nicotinamide adenine dinucleotide) is needed as a “helper molecule” for the enzymatic reaction, providing the necessary electrons. The reaction mechanism the researchers observed in their study is new, however, and so far, unique. Activated by the exposure to light in the flavin-NADH complex, NADH transfers a single electron to the protein-bound flavin. In this way, a flavin radical is created – a highly reactive molecule which is characterised by an unpaired electron. Using time-resolved spectroscopy, the researchers were able to observe how the molecule formed and changed its state.

The flavin radical has a very negative redox potential, which means that it has a large capacity for transferring electrons to reaction partners. “Because of this property, we assume that the flavin radical can also enable additional reactions to take place which would expand the catalytic potential of this enzyme – as well as of other enzymes too, perhaps,” says group leader Prof. Susanne Fetzner.

The enzyme identified is the only one so far which is not naturally photoactive, and carries out a light-independent reaction in the bacterial cell. “The three-dimensional structure of the enzyme shows that the outward-facing flavin co-factor might be the key to photoactivation,” says Simon Ernst, first author of the study.

Photoactive enzymes enable a large number of applications – for example, multi-step catalysis in a one-vessel reaction or spatially resolved catalysis, for example to functionalise surfaces in certain patterns. They can also be useful for so-called prodrug activation in the body or on the skin – a process in which a pharmacological substance becomes active only after metabolization in the organism.