Why Some Forms of Leukemia Only Affect Children 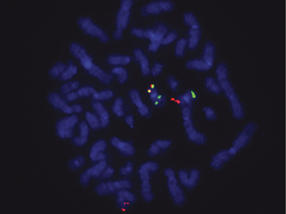 Acute myeloid leukemia (AML) mainly affects children, with the prognosis often being poor despite several decades of research into more effective treatments. A new study led by researchers from the University of Basel and from Gustave Roussy Institute, Paris, explains why some forms of leukemia develop only in infants. The study also reveals potential new therapeutic targets, as the researchers report in the journal Cancer Discovery.

Over recent decades, research into pediatric cancer has intensified and treatments have improved, but the prognosis remains particularly unfavorable for young patients. Acute myeloid leukemia (AML) accounts for 15% of cases of leukemia diagnosed in children and adolescents. Overall survival at age five is around 60%, with relapse being the most common cause of mortality.

There are several subtypes of AML. One of the most aggressive types, which is linked to treatment resistance and a particularly unfavorable prognosis, is acute megakaryoblastic leukemia (AML-M7). It was on this particular form of leukemia that the research teams of Prof. Dr. Jürg Schwaller (University Children’s Hospital Basel and Department of Biomedicine at the University of Basel) and Prof. Dr. Thomas Mercher (INSERM U1170 at Gustave Roussy Institute, Université Paris Saclay) focused their attention.

In 2012, the research team around Mercher found that AML-M7 frequently presents genetic alterations that lead to the expression of an abnormal protein resulting from the fusion of the two proteins normally independent in the cell. Although this fusion – known as ETO2-GLIS2 – has been identified in 30% of AML-M7 cases, the researchers had been unable to explain this abnormality. Similarly, it was unclear why children with AML-M7 are on average under age two while older children (on average towards the age of 6) are usually diagnosed with other pediatric AML subtypes.

To address these questions, the researchers developed a mouse model of AML-M7 to study the expression of ETO2-GLIS2 fusion. In this model, the researchers could first show that the activation of ETO2-GLIS2 fusion in fetal hematopoietic cells is sufficient to rapidly induce aggressive leukemia – which is very similar to AML-M7. If, on the other hand, the fusion was activated in blood-forming cells of adult animals, this childhood leukemia did not occur, whereas other forms of AML developed much later. Moreover, by blocking ETO2-GLIS2 fusion in the in vivo model, researchers were able to bring tumor proliferation to a halt, with the abnormal blood cells once again able to differentiate into normal blood cells.

These findings suggest that this particular type of leukemia only occurs in infants because fetal hematopoietic cells – unlike adult ones – are more sensitive to certain genetic mutations such as ETO2-GLIS2 fusion. The study also shows that ETO2-GLIS2 fusion is the actual motor of this form of pediatric leukemia. The researchers will now try to directly inhibit the activity of this fusion in the tumor cells.