An evolutionary conserved residue known as Thr59 disrupts the repeating pattern formed by a trimeric protein as it refolds while helping a flu virus infect a cell. Researchers at Rice University and Baylor College of Medicine used a complex computer simulation to study the mechanism and look for new targets for drugs to stop the flu.

Rice University and Baylor College of Medicine researchers used computer simulations to study the process by which hemagglutinin helps viruses invade and infect cells. The researchers believe the protein's stem domain unfolds and refolds into a different configuration when triggered, but pauses to release a hidden fusion peptide that binds the virus to the target cell. 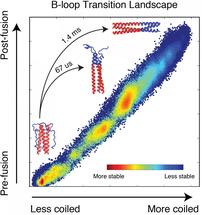 A simulation by Rice University biophysicists detailed the free energy profile that dictates how a protein that helps the flu virus infect cells carries out its mission. The simulations predict how a protein will fold based on the intrinsic energies of each atom in the system. The proteins form loops and coils as they seek their lowest, most stable energy states (blue). In the domain the researchers studied, they found a hitch that slows the folding process that allows binding to the target cell to happen and also presents an opportunity for new vaccines to attack the flu.

There's a hitch in the swing of a protein that delivers the flu virus. Rice University and Baylor College of Medicine researchers believe this mechanism may be a useful target to stop the virus from infecting cells.

The Rice-Baylor team led by biophysicist José Onuchic and biochemists Jianpeng Ma and Qinghua Wang delves further into a glycoprotein complex it began to define in a 2014 paper.

That protein, hemagglutinin, sits on the surface of flu viruses and helps them attach to and transport through the protective membranes of target cells.

The paper begins to define the mechanism that allows the protein to unfold and refold in a snap, changing its form to expose a peptide that attaches the virus to a cell and begins infection. The researchers believe therapeutic drugs can use this mechanism to shut the virus down.

"This protein starts in a folded state and goes through a global transformation, refolding in a completely different state," said Onuchic, co-director of Rice's Center for Theoretical Biological Physics (CTBP). "But there's a small part in the center that evolution has conserved."

That single conserved amino acid residue is the hitch that makes the protein pause in the process of refolding. It allows a fusion peptide buried inside to bind to the target cell and begin infecting it. Without the pause, the refolding would be too quick for binding to take place.

Lead author and Rice postdoctoral researcher Xingcheng Lin modeled that part of the protein, the B-loop of the HA2 domain. HA2 sits beneath another domain, a cap known as HA1 that mutates to escape past defenses. Lin explained that HA1 is a common target for flu medications because the exposed cap domain is more accessible than the protected HA2 domain.

The problem is that HA1 mutates constantly to resist drugs, he said. That influences how effective flu vaccines are every year. Lin and Onuchic said HA2 presents a better target for drugs because the mechanism is highly conserved by evolution.

"If a drug targets HA2, the domain cannot escape by making mutations because the mutations themselves would make it nonfunctional," Lin said. "That kind of drug could become a universal vaccine."

HA2 is a trimeric structure that, when triggered by acidic conditions in the environment near a target cell, transforms itself from a random loop to a coiled coil. Even with the pause, it unfolds and refolds in a fraction of a second, far too fast for microscopes to see. But a computer simulation of the process can be slowed down.

That happens to be a specialty of the CTBP, which uses programs that analyze the energy landscape of proteins to predict how they will fold. Onuchic and his colleagues are pioneers in the theory that folding proteins follow an orderly, "funneled" process that depends on the intrinsic energy of every atom in the chain, each of which constantly seeks its lowest energy state. If all the atomic "beads" can be identified, it's possible to simulate the complex folding process.

The Rice researchers often use coarse-grained models of proteins, a subset of atoms that represent the whole, to predict how they will fold. The new study was much more ambitious and set out to predict the complex unfolding and refolding by using not only every atom in the chain but also every atom in its liquid environment, Onuchic said.

Lin modeled 40 microseconds (millionths of a second) of the HA2 domain transition that represents the entire process, which takes 1.4 milliseconds (thousandths of a second) to complete. Even that shortened process took two years of computer time to deliver results, he said.

"The simulated domain is about 3,000 atoms, but when the environment, including water, is accounted for, the total simulation incorporates around 100,000 atoms," Onuchic said. "It's still an enormous simulation that required state-of-the-art techniques."

Previous theories based on crystallographic images of the before-and-after proteins put forth the idea of a spring-loaded domain that appeared to attach to the target cell after the cap's removal. Onuchic said the complete model of HA2 supports a different mechanism.

"We figured out there's a bunch of energy that makes the final state of HA2 much more stable than the initial state," he said. "But with the spring-loaded mechanism, most of the energy would already be wasted by the time it forms the coiled coil and binds the cell and viral membranes. It wouldn't leave any energy to pull the membranes together.

"That's why we decided to do a full calculation of the system - all the atoms of the protein and all the water," Onuchic said. "It was a gigantic effort."

The conserved hydrophilic (water-attracting) residue, known as Thr59, is of particular interest to the researchers not only for the way it disrupts folding and allows the virus to attack, but also because it has a twin.

"In the full evolutionary tree, these viruses fall into two groups, and the difference appears to be this residue," Onuchic said. "They split 1,500 years ago and somehow, after this separation, they're fully conserved. They haven't been able to change that residue no matter what, and we believe that makes this residue important."

The current research focused on the group that incorporates Thr59 and causes the H3N2 strain responsible for the Hong Kong flu, Lin said. The other residue, Met59, appears in the H1N1 strain that caused the Spanish flu.

"We still have a long way to go to understand the entire protein," he said. "Here, we only studied one domain of one protein, and there are several others that are very important to its function."

"But what Xingcheng has already done is a computational tour de force," Onuchic added. "He showed how this particular residue breaks the helical symmetry of the domain and makes it unstable enough to give the peptide time to grab the membranes."