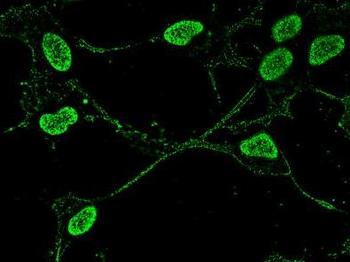 This is a neuronal cell line showing angiogenin (green) in the nucleus and in the neurite outgrowths stained with an antibody to angiogenin.

University of Bath scientists have developed a better understanding of a key protein associated with brain diseases including ALS (motor neurone disease) and dementia by studying how it enters central nervous system cells.

Researchers from the Department of Biology & Biochemistry studied how angiogenin, a protein which crosses into cells and is transported to the cell nucleus, works.

The protein has important roles in developing and protecting healthy brains and growing blood vessels, but mutated angiogenin is linked to the brain disease Amyotrophic Lateral Sclerosis (ALS), also known as motor neurone disease or Lou Gehrig's disease, as well as a type of dementia called Fronto-temporal dementia (FTD).

Recently, angiogenin has also been shown to play an important role in the regeneration of blood stem cells

In a series of in vitro experiments the researchers tested how normal angiogenin was taken into several types of central nervous system cells, under a variety of different biochemical conditions to discover the route it was taking into the cells.

Their key finding is that angiogenin uptake into these cells seems to have more than one biochemical pathway, a finding which means the overall picture of how angiogenin functions is even more complicated than previously suspected.

Dr Vasanta Subramanian, from the Department of Biology & Biochemistry, who led the research, said: "Ultimately understanding the precise function of this protein is really important, and understanding how cells take it up is a critical part of that.

"We discovered that angiogenin is taken up into cells by more than one mechanism which is quite a surprise. It means that coming to a full understanding of how it really works is not going to be so easy, but the more we know about this protein the better because it's involved in several really crucial biological processes."