How do immune cells enter the cerebrospinal fluid and what is their function there? 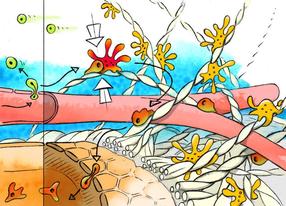 Cell-trafficking between the nervous tissue and its surrounding fluid Cells steadily commute between the tissue of central nervous system and its surrounding fluid via the meninges, i.e. three dimensional networks of vessels, extracellular matrix fibers and cells. This cartoon depicts one of the basic principles behind this trafficking: when a T cell encounters a cellular partner that leads to its activation (white arrows), the T cell firmly adheres to and can enter the spinal cord. When this match does not take place the cell is likely to be washed off into the CSF.

A research team headed by scientists at the Institute of Neuroimmunology and the Institute for Multiple Sclerosis Research (IMSF), University Medical Center Göttingen (UMG), has gained new insights into the immune function of cerebrospinal fluid (CSF). They used real-time microscopy to film the lively trafficking of immune cells between the CSF and the nervous tissue. Here the meninges play the role of checkpoint, allowing the cells to enter the nervous tissue and determining the direction the cells will go. This research provides new insights into the migration and function of immune cells in the cerebrospinal fluid which could be of particular relevance to diagnostic or therapeutic aspects in the treatment of multiple sclerosis, an immune disease affecting the central nervous system.

The cerebrospinal fluid protects the brain

The central nervous system (CNS), made up of brain and spinal cord, is well-protected from possible damage from the outside environment. This protection is provided by bone (skull, vertebrae), a casing of fibers and cells (meninges) and a fluid cushion, the cerebrospinal fluid (Liquor cerebrospinalis). The CSF is completely replaced several times per day, so that it is constantly being produced and siphoned off. This means that CSF circulates, like blood and lymphatic fluid, the big difference being that it doesn’t do so in special vessels like veins and arteries or lymphatic vessels but rather circulates around the the complete surface of the CNS, or more accurately in its “casing”, the meninges. This “third circulation” (next to blood and lymphatic fluid) can transport metabolic products and cells into and out of nervous tissue. CSF is a bodily fluid that plays a large role in medical diagnostics because it can be drawn from the spinal canal at relatively low risk and its composition changes characteristically during neurological disease.

Multiple sclerosis (MS), a chronic-autoimmune inflammatory disease of the CNS, is caused by certain immune cells, so-called T cells. These T cells attack the body’s own nervous tissue and produce a strong inflammatory reaction in the CNS which can be accompanied by neurological deficits such as paralysis and somatosensory defects. It is known that the CSF of a person affected by MS will typically contain an elevated number of T cells, however it was as yet uncertain how the T cells enter the CSF, what function they play there and how the cells shuttle between the CSF and the nervous tissue.

The Göttingen scientists found out that the meninges, which covers the nervous tissue, plays the role of checkpoint for the migration of T cells. T cells exit the blood from vessels and then crawl into the surrounding meningeal tissue. This environment is very special and unique in the body. The vessels are bedded in the meninges and held there by numerous fibrous connective tissue structures which are stretched out like the rope net in a jungle gym. This connective tissue net is additionally populated by cells. Just as blood flows in blood vessels, the CSF flows over and through this fiber-cell meshwork. The researchers discovered that T cells crawling along the surface directly exposed to the CSF can be actually washed off into the CSF. Apparently the decision is made in the meninges whether T cells infiltrate the nearby nervous tissue or are carried away in the CSF. Earlier studies assumed that immune cells entered the CSF at the place where the CSF is produced, namely the choroid plexus.

Which signals regulate the adhesion of cells to the meninges? The researchers could show that special scavenger cells sit in the meninges which can give the T cells the necessary signals for activation and adhesion. The T cells check the scavenger cells systematically for such signals. If the T cells do not receive the signals then they are in danger of being washed away in the CSF. If however they receive the necessary signals for activation and/ or adhesion, they adhere to the surface and can infiltrate the nervous tissue where they set off a destructive inflammatory process.

One important question the researchers now wanted to answer was whether the T cells washed off into the CSF had any significance at all for the disease process. And indeed the Göttingen scientists could show that the cells in the CSF keep their full functionality, i.e. they do not lose their pathogenic potential. This finding could be important for the diagnostic examination of the CSF of MS patients: if one wants to find out something about the characteristics of pathogenic T cells in MS, one should examine T cells from the CSF.

But what happens to the T cells that are washed off into the CSF? The re-searchers could also find an answer to this question. T cells can move back and forth between the CSF and the meninges. This re-docking onto the surface of the meninges has a remarkable similarity with how T cells exiting the blood vessels dock onto the surface of the meninges. The T cells adhere especially well if they meet scavenger cells that produce particularly high amounts of “adhesion material”, which is the case, for example, when the nervous tissue is inflamed, or if scavenger cells give the T cells activation signals.

The observations made by the Göttingen research team disclose new facets re-garding the immune function of CSF. It is especially those T cells which have searched in vain in the meninges for a specific protein or sign of inflammation that land in the CSF. One could see the CSF as being a kind of storage-room that en-sures that potentially dangerous intruders are kept away from the nervous tissue. Nevertheless at any time the circulating cells can re-adhere to the meninges and thereby infiltrate the nervous tissue. Exact information about T cells in the CSF and their function could therefore of diagnostic and therapeutic value.