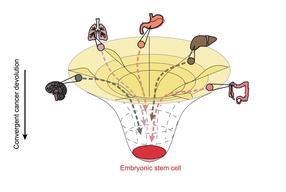 For cancer evolution, regardless of the environment, the pre-defined final destination is the embryonic stem cell (ESC) state, and the closer the evolutionary distance, the poorer the prognosis.

Despite the decades long battle since the 'war on cancer' was first declared, major breakthroughs toward improving clinical outcomes have remained elusive. Now, with advanced sequencing, scientists have increasingly entered the fray from an evolutionary perspective toward cancer in the hopes of gaining new insights.

In a study authors Han Chen and Xionglei He have used a new computational approach to show that as tumors evolve, no matter what the tissue or cell type, a dominant theme has emerged. Those that are trending toward a more primitive, or embryonic stem cell (ESC) state - have a worse clinical outcome.

The authors applied their systems biology approach to study global gene expression profiles from 107 cells types, and in more than 3,000 tumors representing 18 different types of solid tumor cancers. The authors performed their analysis and showed that, regardless of the origins of the tissue, this common and robust pattern emerged. Like in ancient times, where despite the distance, all roads led to Rome, they showed that the distance to the ESC state may represent a robust and predictive measurement for various types of cancer. This is in line with a cancer evolution model recently demonstrated by the same group that cancer is a reverse evolutionary process back to the unicellular 'ground state' by erasing multicellularity-associated cellular features.

"The essence of Darwin's theory is that evolution is driven by purposeless mutations that are subsequently selected by environments, so there is often no pre-defined destination in organismal evolution," said He. "In this study, we showed that, distinct from organismal evolution, cancers of various types evolve toward a pre-defined cellular destination, a finding with implications to both evolutionary biology and cancer prognosis."

For cancer evolution, regardless of the environment, the pre-defined final destination is the ESC state, and the closer the evolutionary distance, the poorer the prognosis.