Spot on against autoimmune diseases and chronic inflammations

New mechanism for inhibition of the immunoproteasome revealed 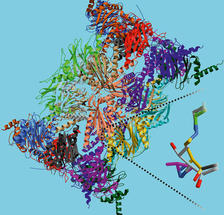 Multiple sclerosis, type 1 diabetes and lupus have one thing in common: They are all autoimmune diseases in which the immune cells can no longer differentiate between friend or foe and thus attack the body’s own tissue. Here, the immunoproteasome, which supplies the immune system with information on processes within the cell, plays a central role. Using a novel mechanism, chemists at Technische Universität München (TUM) have now discovered a way to inhibit its functionality, thereby laying the foundation for possible optimizations of existing medications.

The immune system functions as the body’s police force, protecting it from intruders like bacteria and viruses. However, in order to ascertain what is happening in the cell it requires information on the foreign invaders. This task is assumed by so-called immunoproteasomes. These are cylindrical protein complexes that break down the protein structures of the intruders into fragments that can be used by the defense system.

"In autoimmune disorders like rheumatism, type 1 diabetes and multiple sclerosis or severe inflammations a significantly increased immunoproteasome concentration can be measured in the cells," explainsProf. Michael Grollat theTUM Department of Biochemistry. "The deactivation of this degradation machinery suppresses the regeneration of immune signaling molecules, which, in turn, prevents an excessive immune reaction."

In early 2012 the research team led by Groll fulfilled a prerequisite for designing specific active substances: They solved thecrystal structure of the immunoproteasome, allowing them to spot the subtle but significant differences between the otherwise nearly identical structures.

The potential drug that the researchers developed is based on the epoxyketon ONX 0914, an immunoproteasome inhibitor that is undergoing clinical trials. The researchers replaced the epoxyketon with a sulfonyflouride group and modified its positioning on the inhibitor. The result was a new compound that selectively inhibits the immunoproteasome without influencing the constitutive proteasome.

First author Christian Dubiella explains what makes the discovered mechanism so special: "Normally inhibitors clog up the active center of the enzyme and thereby disable its functionality. The substance synthesized by us, however, attaches to its target, causing the active center to destroy itself, and then gets detached after successful inactivation." Especially the insights into the atomic mechanisms that were uncovered using X-ray structure analysis open the door to the custom-tailored development of immunoprotease inhibitors. This may pave the road for a future generation of medications.