The secrets of Nobel Prize-winning pump 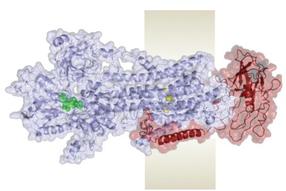 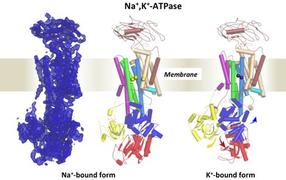 The structure of the sodium-potassium pump presented in a schematic cell membrane. The extracellular space is situated above and the intracellular space below the figure. The left-hand side of the figure shows the experimental reproduction of the pump’s structure in the sodium-bound state. The reproduction is based on x-ray crystallography. The blue web shows how atoms are situated in long chains of amino acids which make up the protein molecule that constitutes the pump. The central section of the figure is a schematic presentation of the structure in which the different colours represent the various movable parts of the pump. The approximate position of the three Na+ ions is indicated with small, yellow balls. To the right, the structure of the potassium-bound state is shown using the same colour codes and showing the two potassium ions as dark purple balls. The structural changes are evident. The structures correspond to two central steps in the pump’s functional cycle, which pumps three sodium ions out of the cell for every two potassium ions pumped in.

Jens Chr. Skou was awarded the Nobel Prize for his discovery of the sodium-potassium pump. Now, a team of researchers from Aarhus has completed the description of its structure. A result which is of vital importance for our understanding of the body's functions and essential for our understanding of illness and for the development of new medicines.

The story of the sodium-potassium pump has strong ties to Aarhus. In 1997, he received the Nobel Prize in Chemistry for his discovery, and over the years, research on the pump has remained a strong focus area at the university. In 2007, the joint efforts of various research teams at Aarhus University led to the description of the structure of the potassium-bound state of the pump - now, Aarhus researchers have also described the other state of the pump; the sodium-bound state. The results were recently published in the journal Science.

The pump is pivotal to the body’s function

The sodium-potassium pump is a vital enzyme found in all human cells which constantly maintains an optimal ion balance. This uses up a great deal of energy – about a fourth of the body’s energy, the so-called ATP, is used to keep the pump going; in the brain the share is nearly 70%.

The sodium-potassium pump works by pumping two potassium ions into the cell and pumping out three sodium ions using the energy from an ATP molecule. This leads to a build-up of considerable differences in the concentration of the ions on the outside and inside of the cell. Differences which are essential for the communication and transport in and out of the cell of nutrients and other compounds - and for the regulation of the cell’s pH and volume. If the pump does not function properly in brain cells, the result is severe neurological conditions such as migraine with aura, muscle spasms or unilateral paralysis (hemiplegia).

Knowledge of the pump is therefore crucial for our understanding of the matter and energy balance and of the disease mechanisms which come into play when the pump does not function properly. This knowledge is also important in order to develop new medicines targeting the pump.

“The description is a decisive step towards understanding the function of the pump. We now know where and how to focus future studies,” says Professor Poul Nissen, one of the researchers behind the study who also spearheaded the structure description of the potassium-bound state. “But this study also points the way forward in other ways: Young researchers have been the key players in this work and have developed and made available new knowledge and methods in basic biomedical research. The discovery of the pump’s secrets is not only exciting research work but also motivates the development and recruitment of new research talents to the benefit of universities and corporations alike,” says Poul Nissen.

By describing both sides of the sodium-potassium pump, the researchers have made an important advance towards understanding the pump discovered by Jens Christian Skou back in 1957.We now understand how the pump works as a 'molecular nanomachine’, and we can observe how it is affected by mutations which cause it to malfunction. The researchers now aim to establish a more detailed description of the pump and to gain more in-depth knowledge about its function and impact on health and disease.