"Our results represent a real breakthrough, since attempts to decipher the structure of a TRAP transporter had already been going on for about 20 years" 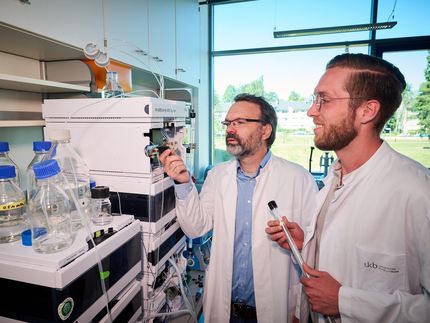 (from left) PD Dr. Gregor Hagelueken and Dr. Martin Peter are on the trail of a bacterial freight elevator in the laboratory that helps pathogens hide from our immune system.

Like all cells, bacteria are surrounded by a cell membrane. This thin layer of fat holds together the cell's nutrients, genetic material and proteins, thus enabling it to survive. On the other hand, nutrients or molecules that serve as building blocks for the cell, for example, must be able to cross the membrane, otherwise the bacterium would literally starve to death. For this purpose, cells make use of so-called membrane transporters. These are protein molecules that are located in the cell membrane and use complicated movements to transport substances across the membrane barrier. The so-called TRAP transporters help pathogens such as Haemophilus influenzae or Vibrio cholerae to move a small sugar molecule called sialic acid across the cell membrane. Sialic acid is very abundant in human tissue, and the bacteria can literally pick it up with the TRAP transporter and incorporate it into their cell wall. "There, it serves as a kind of invisibility cloak for the bacteria to hide from our immune system," says Bonn scientist PD Dr Gregor Hagelueken.

The researchers from Hagelueken's group at the Institute of Structural Biology at UKB used so-called cryo-electron microscopy to decipher the structure of the transporter. "Our results represent a real breakthrough, since attempts to decipher the structure of a TRAP transporter had already been going on for about 20 years," says post-doctoral researcher Martin Peter from Bonn. He recalls the moment when it became clear that the monumental task had been accomplished: "At that moment, we were the first to ever see a TRAP transporter. It was then immediately clear to us how the protein works. It moves up and down like an elevator in the membrane."

In collaboration with Prof. Dr. Ulrich Kubitscheck's group at the Clausius Institute for Physical and Theoretical Chemistry at the University of Bonn, the researchers were able to watch the transporter at work in real time. "The TRAP transporter is found in many disease-causing bacteria," says Hagelueken, "maybe in the future our structure can help develop antibiotics to make sure the elevator gets stuck."