SARS-CoV-2 hijacks nanotubes between neurons to infect them

Infecting neurons in the absence of a receptor 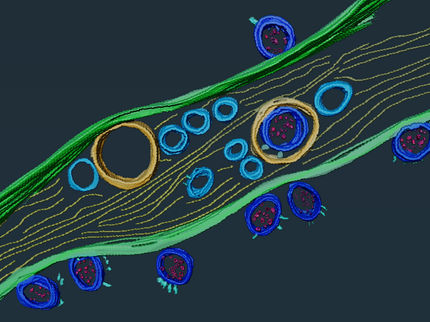 SARS-CoV-2 viral particles (in dark blue) inside and on the surface of a nanotube. Cryo-electron tomography images segmented using Amira software.

COVID-19 often leads to neurological symptoms, such as a loss of taste or smell, or cognitive impairments (including memory loss and concentration difficulties), both during the acute phase of the disease and over the long term with "long COVID" syndrome. But the way in which the infection reaches the brain was previously unknown. Scientists from Institut Pasteur and CNRS laboratories have used state-of-the-art electron microscopy approaches to demonstrate that SARS-CoV-2 hijacks nanotubes, tiny bridges that link infected cells with neurons. The virus is therefore able to penetrate neurons despite the fact that they are lacking the ACE2 receptor that the virus usually binds to when infecting cells.

How does SARS-CoV-2 enter brain cells? A study shows that the virus uses nanotubes that form between infected cells and neurons to gain access to neurons. These transient dynamic structures are a result of membrane fusion in distant cells. They enable the exchange of cellular material without the need for membrane receptors, the normal means of entering and exiting the cytoplasm. The Membrane Traffic and Pathogenesis Unit, led by Chiara Zurzolo at the Institut Pasteur, has already found that nanotubes play a role in degenerative diseases such as Alzheimer's and Parkinson's by facilitating the transport of proteins responsible for these diseases.

Infecting neurons in the absence of a receptor

Although the human cell receptor ACE2 serves as a gateway for SARS-CoV-2 to enter lung cells – the main target of the virus – and cells in the olfactory epithelium, it is not expressed by neurons. But viral genetic material has been found in the brains of some patients, which explains the neurological symptoms that characterize acute or long COVID. The olfactory mucosa has previously been suggested as a route to the central nervous system, but that does not explain how the virus is able to enter neuronal cells themselves.

According to this new study, SARS-CoV-2 is also thought to be capable of inducing the formation of nanotubes between infected cells and neurons, as well as among neurons, which would explain how the brain is infected from the epithelium. The research team revealed multiple viral particles located both inside and on the surface of nanotubes. Since the virus spreads more rapidly and directly from within nanotubes than by exiting one cell to move to the next via a receptor, this mode of transmission therefore contributes to the infectious capacity of SARS-CoV-2 and its spread to neuronal cells.

But the virus also moves on the external surface of nanotubes, where it can be guided more quickly to cells that express compatible receptors. "Nanotubes can be seen as tunnels with a road on top," suggests Chiara Zurzolo, Head of the Institut Pasteur's Membrane Traffic and Pathogenesis Unit, "which enable the infection of nonpermissive cells like neurons but also facilitate the spread of infection between permissive cells."

This publication combines research on in vitro cultures, showing that healthy neuronal cells are infected if they come into contact with infected cells, with the use of state-of-the-art microscopy tools. The Titan Krios microscope in the Institut Pasteur's NanoImaging Core Facility offers unprecedented resolution of biological samples and nanomolecules that is closer to real biological conditions. "With this instrument, novel imaging approaches have been developed to evaluate the structure of SARS-CoV-2 and the architecture of nanotubes," explains Anna Pepe from the Institut Pasteur's Membrane Traffic and Pathogenesis Unit, first author of the study.

Working in cooperation with the Institut Pasteur's Ultrastructural BioImaging Core Facility, the research teams used precise investigative methods to detect structures in the nanotubes that were subsequently identified as "virus factories." The nanotubes between neurons represent a propitious environment for SARS-CoV-2 to develop, since it is invisible to the immune system. Chiara Zurzolo believes that "it may represent a mechanism for immune evasion and viral persistence that could be favorable to the virus."

This study is an example of how basic interdisciplinary research, involving cellular biologists, virologists and state-of-the-art imaging techniques, can lead to new discoveries. It paves the way for further research on the role of cell-to-cell communication in the spread of SARS-CoV-2. It also encourages exploration of alternative therapeutic approaches to hinder the spread of SARS-CoV-2, alongside current projects that are mainly focused on blocking entry via the ACE2 receptor.