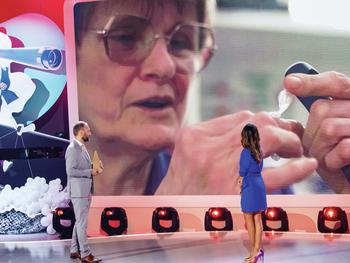 Katalin Karikó, winner of the European Inventor Award 2022 in the category “Lifetime achievement”. Award accepted on her behalf by Gabor Szabó, Associate Director at BioNTech, at the hybrid award ceremony on 21 June 2022.

For more than four decades, Karikó has championed the therapeutic potential of mRNA, overcoming both scepticism and countless challenges in her quest to unlock its effective use for humans. Her work not only paved the way for the most successful mRNA-based COVID-19 vaccines but also opens the door to new therapies for many other diseases and conditions.

"With her vision that significant medical benefit could be achieved with the mRNA molecule, Katalin Karikó has generated an impact that goes far beyond the now well-documented medical success", says António Campinos, President of the European Patent Office. "Her dedication to science and perseverance together with the innovative quality of her research have gifted the world with a breakthrough innovation that holds potential for new perspectives in the fight against some of the worst medical threats to mankind around the globe."

Karikó was honoured at the European Inventor Award 2022 ceremony, a hybrid event watched online by a worldwide audience. The Award is one of Europe's most prestigious innovation prizes and is presented annually to outstanding inventors from Europe and beyond who have made an exceptional contribution to society, technological progress and economic growth.

Karikó's research career is marked by her dedication to exploiting the medical potential offered by the mRNA molecule. Born in a small town in rural Hungary, her early interest in biology and thirst for knowledge led her to pass competitive entry exams for the University of Szeged, where she joined the cutting-edge Biological Research Centre (BRC) of Hungarian Academy of Sciences. In 1985 she and her husband left Hungary for the US to take up a position at Temple University in Philadelphia. There she spent three years trying to use double-stranded RNA to treat HIV patients. She then took another offer in Bethesda, Maryland, where she read extensively about emerging work on mRNA, a molecule that carries instructions for building proteins from a cell's DNA to its molecular building machines.

Spotting the potential of mRNA

Since 1990, scientists had known that injecting synthetic mRNA into a body could result in the production of specific proteins on demand. Soon Karikó became acutely aware of the medical potential of mRNA:

"I immediately imagined mRNA could be beneficial and I was thinking of something very simple, like wound healing," she says. "So, I started to make a different RNA coding for the production of a protein which had already been found to accelerate wound healing and later also close without a scar."

When she was offered a position at the University of Pennsylvania (UPenn) in 1989, she directed her research focus on the molecule. As an unstable compound, however, mRNA is difficult to work with, and the cost of development saw it fall out of favour in the scientific community in the 1990s. Karikó couldn't get funding for her mRNA work and was demoted from the faculty position. She chose to stay as a senior researcher - a decision that would pay off: In 1997, she found an ally in a new immunologist colleague, Drew Weissman. Together they worked on a therapeutic mRNA-based HIV vaccine using a nucleoside-modified mRNA molecule they had created.

This marked the turning point: With further work to purify the mRNA, Karikó and Weissman managed to unlock a broad range of scenarios in which the molecule could feasibly be used in disease treatment and vaccination. They filed the seminal patents for their work in 2005, which paved the way to commercialisation of the modified mRNA through a company RNARx, which Karikó and Weissman set up in 2006. The University of Pennsylvania, however, sold the licences to a different company: "Without the patent, we were not a real company," says Karikó. "But I decided at that point that I am not done."

The medical breakthrough came when Karikó joined BioNTech in Germany, which had a clinical trial with mRNA and were persuaded by her to adopt nucleoside-modified mRNA. She landed a contract with Sanofi to develop modified mRNA to be injected directly into tumours to promote cancer-specific immune responses, and was working on an mRNA-based flu vaccine with Pfizer when first news of COVID-19 broke in late 2019.

BioNTech quickly pivoted from flu to COVID-19 by tweaking the vaccine to match the genetic sequence of the novel coronavirus - and rapidly advanced to testing and deployment with Pfizer. Another, nucleoside-modified mRNA-based COVID-19 vaccine from US company Moderna, approved for use around the same time, was also based on Karikó and Weissman's technology.

A field with growing potential

Beyond COVID-19, Karikó's research has paved the way to a wide range of medical treatments based on modified mRNA. Efforts are underway to develop therapeutic vaccines for different types of cancer, as well as treatments for cardiovascular diseases and metabolic disorders. The scientist herself has a list of around 30 modified-mRNA-based therapies she would like to develop - a fitting outlook for a career built on pushing on no matter what happens: "You have to learn to take the negative stress, convert it to positive stress and that was my attitude," she says. "It didn't matter what the people were saying. If it was constructive, I would listen and the rest of it, I absolutely ignored... With that kind of attitude, you can make it."