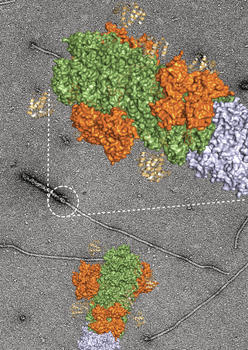 Electron micrograph of the junction between the danger sensor NLRP3 and its signal protein, shown in magnification with the calculated protein structure.

Redness, swelling, pain - these are signs of inflammation. It serves to protect the body from pathogens or foreign substances. Researchers from the Universities of Bonn and Cologne were able to show that inflammatory reactions of an important sensor protein proceed in a specific spatial direction. This finding has the potential to conceivably stop inflammation at the "growing end", and thus bring chronic inflammatory diseases to a halt.

If bacteria or viruses attack living cells or other foreign substances appear in them, the danger sensor with the abbreviation NLRP3 is activated. "The protein deposits in the brain that are characteristic of Alzheimer's disease, the so-called amyloid-ß plaques, can also set NLRP3 in motion," says Prof. Dr. Matthias Geyer from the Institute for Structural Biology at the University Hospital Bonn, referring to earlier studies. As these previous studies by the researchers show, this reaction increasingly fuels itself: The inflammatory reaction triggered by NLRP3 promotes the further deposition of amyloid-ß plaques and contributes significantly to the disease process.

Once activated, several NLRP3 proteins attach to each other and in this way form the nucleus for a thread-like structure at which more and more proteins gather. "The reaction kicks in as soon as about a dozen of the NLRP3 molecules are present," Geyer reports. In theory, an infinite number of NLRP3 molecules can join together and extend the thread-like structure - scientifically called a "filament" - further and further. Inga Hochheiser from Prof. Geyer's team has now been able to show the direction in which this filament grows and continues to expand. "We were able to gain these insights using cryo-electron microscopy. This method makes it possible to observe protein molecules with up to 80,000-fold magnification and thus make them directly visible," says Hochheiser.

"Still image" of the thread-like structure under the microscope

In tiny steps, the scientist drizzled NLRP3 isolated from cells onto a sample carrier and flash-froze this mixture. This provided the researchers with a kind of "still image" under the cryo-electron microscope. The emerging thread-like structure of NLRP3 molecules arranged side by side was thus visualized. "These individual images made it possible to understand how the filaments elongate, just like in a film," says Hochheiser. As the molecules fall differently on the sample carrier when drizzled, they can be seen from different perspectives under the microscope. These different views can be combined on the computer to create a three-dimensional image. The results showed that the filaments only form in one direction. "This allowed us to visualize part of the inflammatory apparatus and literally read the direction of growth," says Prof. Geyer, who led the study and is a member of the Cluster of Excellence ImmunoSensation2 and the Transdisciplinary Research Area "Life and Health" at the University of Bonn.

"The technical challenge was to find the transitions in the thread-like structures and make them visible in the image," says Prof. Dr. Elmar Behrmann from the Institute for Biochemistry at the University of Cologne. "The new findings now allow us to target the growing end of the inflammatory response using antibodies or drugs," Hochheiser explains. This brings the researchers closer to their goal of stopping the further build-up of the inflammatory apparatus and thus counteracting chronic inflammation.