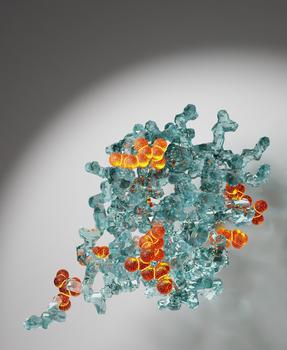 A small group of researchers including Dennis Kurzbach from the Faculty of Chemistry of the University of Vienna just published in "Nature Protocols" an advanced NMR (Nuclear Magnetic Resonance) method to monitor fast and complicated biomolecular events such as protein folding.

For example, protein folding was long considered as one of the great mysteries of modern research. This crucial process during which amino acid chains adopt a 3D structure and functionality, takes place within milliseconds. Being this fast, protein folding events could often not be characterized by NMR spectroscopy; the standard method for studying molecular structures. Employing hyperpolarized water, researchers have now developed a method that dramatically enhances the signals of the proteins, nucleic acids, and other biomolecules. This renders monitoring of processes such as protein folding possible.

With NMR spectroscopy, researchers can measure the magnetic properties of atoms and thus analyse the atomic structure of molecules in solution. The method of Dennis Kurzbach and his colleagues Christian Hilty (USA) and Lucio Frydman (Israel) is based on NMR and enables the monitoring of biological processes in real-time. By using hyperpolarised water, the researchers significantly enhanced NMR signals of the investigated samples and therefore boost the method’s sensitivity.

With hyperpolarization methods, more precisely dissolution DNP (D-DNP), a signal enhancement of over 10,000-fold is possible. "The hyperpolarized water acts as a booster for the NMR signals of a protein during the measurement. The hydrogen nuclei of the hyperpolarized water are exchanged with those of the proteins, thus transferring the signal strength to the latter," says Dennis Kurzbach from the Institute of Biological Chemistry and deputy head of the NMR Centre of the Faculty of Chemistry.

With the new method, the researchers can record an NMR spectrum every 100 milliseconds and use it to track the 3-D coordinates of individual amino acids and how they change over time. "This allows us to monitor processes that occur in milliseconds and distinguish individual atoms," says chemist Dennis Kurzbach, who focuses in his research on developing new methods.

Increasing use of NMR for protein analyses

In addition, they present six examples for method application, including the observation of protein folding or even the interactions of RNA (nucleic acids) and RNA-binding proteins as the basis for gene expressions in the cell. According to the scientists, the new method can be used for specific studies of RNA, DNA and polypeptides, especially when signal enhancement reaches the "magic" number of 1,000-fold.

An NMR spectrometer equipped with a hyperpolarization prototype is a prerequisite for NMR boosted by hyperpolarized water. However, this kind of infrastructure is not common yet. The Faculty of Chemistry of the University of Vienna is equipped with a DDNP-NMR device since 2020, which has been constructed by Dennis Kurzbach based on an ERC Starting Grant.