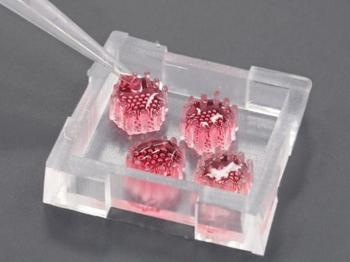 A new organoid-on-chip platform robustly mimics the key features of human pancreas development. This is a milestone on the way to being able to diagnose pancreatic cancer at an early stage in the future. The study was conducted by an interdisciplinary team of researchers from Helmholtz Zentrum München, Technische Universität München (TUM) and Ulm University Hospital.

Pancreatic ductal adenocarcinoma (PDAC) is an extremely aggressive cancer that is often diagnosed too late and can only be treated poorly. PDAC accounts for more than 90 percent of pancreatic cancer cases. The chance of living longer than five years with the disease is only eight percent. Risk factors of PDAC include age, diabetes, obesity, as well as lifestyle habits such as smoking and alcohol consumption. As some of these factors increase worldwide, studies predict that the incidence of PDAC and related deaths will double in the next decade.

Early diagnosis is therefore of key clinical importance. The earlier PDAC is detected, the greater the chances of halting or slowing the disease. For this, clinics need suitable tissue material on the one hand and better diagnostic tools on the other. In the current issue of the journal Nature Biomedical Engineering, a research team led by Matthias Meier (Helmholtz Pioneer Campus at Helmholtz Zentrum München and TUM), Meike Hohwieler and Alexander Kleger (Ulm University Hospital) presents a new and so far unique organoid-on-chip platform that provides much-needed insight into the early developmental phase of the pancreas.

A better understanding of what mechanisms are involved in pancreatic development and cancer is critical for identifying reliable biomarkers as new diagnostic tools. Scientists need reliable in vitro models of the human pancreas for this work. With the research group's new approach, tissue from healthy or diseased individuals is no longer necessary for this purpose.

"We have succeeded in mimicking the development of the human pancreas on a chip platform. To do this, we reprogrammed human pluripotent stem cells into pancreatic ductal cells. Our platform is a robust tool for reproducing organ development - this has also been confirmed by time-resolved transcriptomic single cell analyses," says Matthias Meier, one of the study leaders.

In order to better control important 3D features of the organoid such as shape and size, the team developed a new so-called microwell chip. The new design also improved the reproducibility of the approach. Using functional analysis of the developing organoids, the group was able to program the cells to resemble pancreatic ductal cells. Eventually, they developed a mature organoid with important key physiological features of a pancreas, including secretion of extracellular matrix components and intercellular communication. "The replication of healthy pancreatic ductal cells is crucial for any further analyses and conclusions," says second study leader Alexander Kleger.

The research group already used the new chip and organoids to identify new biomarkers for early-stage PDAC in a pilot study. In the process, the team came across the protein filamin b, which is linked to the development of several types of cancer. Using a small cohort of PDAC patients, the group confirmed filamin b as a promising biomarker for the early detection of pancreatic cancer, detectable in liquid biopsies. In addition, the biomarker could be helpful in predicting the course of the disease.

"The fact that we have now been able to identify a new early detection and potentially prognostic biomarker for pancreatic cancer with our technology is a great success. This could potentially allow us to diagnose the cancer at an early stage in the future. In addition, the technology could help us develop new therapies that could be used at an early stage of the disease or even preventively," explains Sandra Wiedenmann, first author of the study.