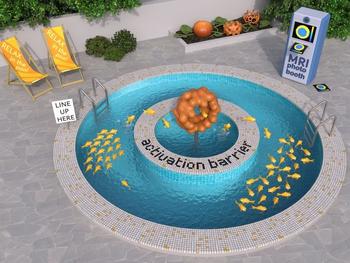 Xe MRI allows the quick and accurate quantification of the phase coherence loss in exchange-coupled Xe pools. Such relaxation measurements enable determination of the activation energy for the binding of xenon in host molecules such as the drug carrier cucurbit[6]uril.

Xenon magnetic resonance imaging offers deep insights into the human body and opens up new possibilities in the diagnosis and treatment of diseases. Physicists from the Leibniz-Forschungsinstitut für Molekulare Pharmakologie (FMP) in Berlin have now achieved a considerable improvement of the method of detection involving the noble gas xenon. Applying a number of new technical tricks and testing two molecules, the scientists managed, within seconds, to gain more image information from single-shot data acquisition than was previously possible. Moreover, the new contrast mechanism requires less contrast agent and no gadolinium, the subject of continued debate with regard to potential intolerance. The method is around 850 times more sensitive than comparable contrast agents in conventional MRI involving water molecules.

The ability to detect pathological processes in the body that would otherwise remain hidden using conventional imaging techniques – this is the potential promised by xenon magnetic resonance imaging. In contrast to conventional MRI, this method involves detecting the non-toxic noble gas xenon rather than water molecules. Thanks to the special magnetization of xenon, it has an extremely high signal strength in MRI. In addition, xenon imaging also has analytical potential because molecules that interact with xenon can be used as drug carriers that can now be localized and characterized using MRI.

Physicists at the FMP have been working for years to further perfect xenon MRI so that it can be used, for example, in the diagnosis and treatment of cancer. Following the discovery of several molecules that are able to bind the noble gas xenon very well to deliver high-contrast images from inside the body, Dr. Leif Schröder’s team has now achieved another success.

“We have made accessible another contrast mechanism that is capable of generating significantly more image information than the previous method in a shorter space of time,” explained Leif Schröder. “The so-called relaxivity is much higher, which means that we need much less contrast agent than required by conventional methods to generate image contrast, which is extremely beneficial, particularly for medical applications.”

The work now published in “Chemical Science” focused on the T2 contrast – one of the two contrast parameters in magnetic resonance imaging alongside T1 – and how it can be influenced by the two molecules cryptophane-A monoacid (CrA-ma) and cucurbit[6]uril (CB6). Although these two metal-free molecules are considered highly potent candidates for xenon MRI, this question had not been investigated previously.

Leif Schröder and his colleague Martin Kunth were able to demonstrate that even short contact times between xenon and the molecule resulted in a signal change. A single shot involving elaborate, continuous observation of the signal suffices to be able to display the T2 contrast for an entire series of images. Previously, at least two measurements were required for a single image – one with an “on” signal and the other with an “off” signal – and it took at least 30 or seconds for an image to be encoded. The new contrast mechanism manages this in around 7 seconds from just a single shot.

“It results in extreme time savings compared to the old method,” remarked Martin Kunth. Another advantage of the new mechanism is that no additional reference images or controversial metal complexes are needed to create the T2 contrast. In addition, more than 1,000 images with progressive contrast can now be reconstructed from a single continuous signal. The conventional method was only able to generate a maximum of 30 images, each of which had to be taken separately, involving far greater effort. “Essentially, it is a very simple measurement; we need just one data set to obtain an information-rich series of images with a much better spatial resolution,” emphasized the physicist.

Data with a high informative value

The simple measurement is coupled with complex data processing, which is also innovative. The software, programmed by the FMP researchers, is able to compute more than just relative signal comparisons – where is it lighter, and where darker. In fact, it is able for the first time to calculate absolute numbers for certain physical parameters. The numbers describe the exact exchange rate between xenon and the molecules, enabling conclusions to be drawn on aspects such as the stability of a molecule as a drug carrier.

“Drug transporters must possess a certain degree of stability to ensure that they do not release the drug too early or too late. We are now able to measure this property, as well as the activation energy needed for entering the drug carrier,” stated Martin Kunth, describing one of the many new potential applications.
“In a nutshell, our new method enables us not only to improve clinical imaging, but also to provide answers to pharmacological or chemical-analytical questions,” added Leif Schröder. “As such, we have taken xenon MRI a crucial step forward, which will now benefit all researchers and clinics that work with it.”