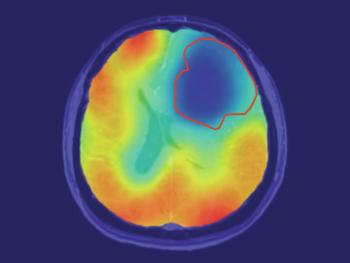 The red line delineates the tumor area; the colored contrast shows the oxygen metabolism. As predicted by Warburg's theory, oxygen turnover in the tumor is reduced (blue).

Scientists from the German Cancer Research Center have developed a new method that uses oxygen to identify brain tumors more effectively by magnetic resonance tomography (MRT). To do so, they rely on a metabolic feature of the tumor cells that they can make visible using a completely new imaging method. The researchers hope that the new technique will help further improve the diagnosis and characterization of brain tumors in future.

Tumor cells differ considerably from healthy tissue in terms of their metabolism, as discovered by the German physician and biochemist Otto Heinrich Warburg back in the 1920s. He observed an accumulation of lactic acid in tumor cells. This metabolic product is the result of the anaerobic metabolism (i.e., without oxygen) that tumor cells prefer, even if enough oxygen is available. This phenomenon became known as the Warburg effect.

"We wondered whether this feature could be made visible on MRT," explained Daniel Paech, a physician and physicist at the German Cancer Research Center (DKFZ) in Heidelberg. Traditional MRT scans can only make structural changes visible.

The new method developed by the DKFZ researchers does not require radioactivity and shows the oxygen-dependent metabolism of the tissue very specifically. The researchers use a stable, non-radioactive oxygen isotope, 17O2, which is present in small quantities in the air. The test subjects breathe in this special oxygen in an enriched form. Everywhere where oxygen is metabolized in body tissue, 17O2 forms a compound with hydrogen. That means that it can be demonstrated in the MRT magnetic field. Tissue that metabolizes a large amount of oxygen thus appears light on the image.

Daniel Paech, his colleague Sebastian Niesporek, and their team of researchers at DKFZ began by trying out the principle in three healthy subjects. As expected, a high oxygen turnover was seen in their brains. The researchers then used the new oxygen MRT to examine ten individuals who had been diagnosed as having a brain tumor. "The result was really impressive: The tumors appeared on the images as dark spots because there was no oxygen metabolism there," Paech remarked. "We were surprised that this was the case both in aggressive higher-grade tumors and in less aggressive low-grade tumors," he added. It was not previously clear whether the Warburg effect plays a role in low-grade brain tumors too.

The DKFZ researchers have not only obtained new findings on the biology of brain tumors; they have also developed a method capable of characterizing tumor tissue more accurately. "We see the method as supplementing structural MRT imaging to show differences between tumor and healthy tissue," Paech explained. "The additional information might help characterize tumors more precisely in future on the basis of their particular metabolism."

A comparable technology currently only exists for PET – with the disadvantage that it requires the radioactive oxygen isotope 15O2. Moreover, this isotope needs to be produced on site using considerable resources, which is only possible at a few hospitals.

Even with the new MRT method devised by the DKFZ researchers, there are still some problems that need to be solved before it can be used in clinical practice. Enriched 17O2 is still very expensive, although Paech assumes that the production costs may drop if the molecule were to be produced on a larger scale.

"In future, clinical studies need to be carried out," Paech commented. "They are necessary to see whether 17O2 can be approved and to demonstrate the clinical benefit of the method," he continued.

The new method was developed using DKFZ's 7T MRT as part of collaboration between the Division of Radiology and the Division of Medical Physics in Radiology and was awarded the Roland Ernst Prize for Interdisciplinary Research in Radiology in December last year. The researchers expect oxygen MRT to provide valuable information about other diseases associated with metabolic changes in future too, such as Alzheimer's disease and multiple sclerosis.