A promising but delicate therapeutic target 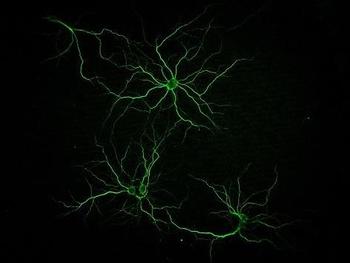 These are primary neurons in culture labeled with an antibody.

An interdisciplinary research study of the University of Barcelona identified two potential candidates to treat Alzheimer's disease. These are two marine molecules, meridianine and lignarenone B, able to alter the activity of GSK3B activity, a protein associated with several neurodegenerative diseases.

The researchers used several biocomputational techniques to detect these so far unknown compounds, which were later validated with experiments in cultures of neuronal cells in mice. These results will allow researchers to better understand the functioning of the GSK3B molecule and build a promising starting point for the development of new drugs against Alzheimer's disease.

The paper, published in the journal Biomolecules, is the result of the collaboration between two UB research teams with the participation of Laura Llorach Pares and Conxita Àvila, from the Faculty of Biology and the Biodiversity Research Institute (IRBio) of the UB, and Ened Rodríguez, Albert Giralt and Jordi Alberch, from the Faculty of Medicine and Health Sciences and the Institute of Neurosciences of the UB (UBNeuro). Other participants were the technological company Molomics and the former company Mind the Byte.

A promising but delicate therapeutic target

The GSK3B is an abundant protein in the brain with an important role in the development of Alzheimer's disease and other neurodegenerative diseases, since changes in their activity affect negatively the basic synaptic signals in learning and memory and these can even be interrupted. This is why, over the last years, researchers made many efforts to design GSK3B inhibitors, although without enough results so far. "GSK3B has always been an appreciated molecule in the treatment for Alzheimer's disease. However, clinical trials with all potential inhibitors caused adverse effects, which were a disappointment. We are still far from any clinical application, the molecules we described have the potential to overcome the limitations of other inhibiting drugs", says Albert Giralt, also member of IDIBAPS and the Network Center for Biomedical Research in Neurodegenerative Diseases (CIBERNED).

Using biocomputing and molecular dynamic simulation techniques, researchers analysed the potential of a group of marine molecular families -isolated and characterized by the team of Conchita Avila- to inhibit the GSK3B activity. "These are meridianins, a family of alkaloids from marine benthic organisms from the Antartica, and lignarenones, obtained from a gastropod mollusc from the waters of the Mediterranean Sea", notes Àvila.

Then, the researchers carried out an in vitro experimental validation on the inhibiting ability of these molecules using cultures of mice neurons. The results show both marine compounds do not cause neurotoxic effects and, in addition, they promote structural neuronal plasticity. "The new molecules do not have an excessive inhibition of GSK3B, which is interesting, since inhibiting it excessively could be the cause of some of the adverse effects described for other inhibitor drugs. Also, these induce the growth of the neuronal tree, an aspect of great interest in Alzheimer's disease, where atrophy and dysfunction play a more relevant role in the appearance of symptoms than in neuronal death", notes Albert Giralt.

According to the researchers, this is a relevant discovery, since it is not easy to find new molecules that can be therapeutic for Alzheimer's, specially when many therapeutic targets have been disappointing. However, Giralt says this is only the beginning: "To confirm the potential of these new molecules, the next step is to evaluate during the next years whether treatment with these drugs improves symptomatology in mice models with Alzheimer's, and if so, to try to conduct clinical studies with these molecules", concludes the researcher.