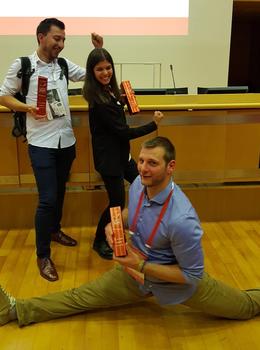 On June 18, 2019, the 48th HPLC Conference (University of Milano-Bicocca, Milan, Italy) played host to the debut of the Separation Science Slam, sponsored by KNAUER, Merck and The Analytical Scientist. Six scientists under the age of 35 were given the opportunity to present their scientific work in under seven minutes to a large and cheering crowd and jury.

The six finalists were chosen by the jury from abstracts submitted earlier in the year. All finalists were judged on both scientific content and communication style. The jury members were: Massimo Morbidelli (HPLC 2019 Chair), Gert Desmet (HPLC Permanent Scientific Committee), Rich Whitworth (The Analytical Scientist, representing all three sponsors), Bob Pirok and Martina Catani (Csaba Horváth Young Scientist winners from 2017 and 2018, respectively).

The Bronze Winner was Pascal Breuer from the University of Amsterdam, Netherlands, who presented “Separation technology for a million peaks.” Breuer shared the journey of two brother-molecules who traveled an adventurous route through an analytical liquid phase separation coupled to optical and mass-spectrometric imaging techniques accompanied by great (and loud) sound effects.

The Silver Winner was Simona Felletti from the University of Ferrara, Italy, with “Enantiomer-chiral selector affinity: the science of love.” Felletti described the love of a chiral selector with the help of LEGO and an amusing commentary – a wonderful way to explain a complex topic.

The Gold Winner was Nándor Lambert from the University of Pécs, Hungary, who described “The advantage of using polyurethane foam for the insulation of liquid chromatographic columns.” Lambert – a self-professed “regular, everyday chromatographer” – astounded the 300-strong audience by rapping about the need for better and cheaper column insulation and his solution: polyurethane foam. The crowd in Aula Magna clapped along with the music and celebrated the presentation with the loudest cheer of the evening, indicating a potential Gold Winner; the jury agreed!

The premiere of the Separation Science Slam was a huge success and enjoyed by many HPLC 2019 attendees. Not only did it showcase the talent of young scientists, whose creativity, courage, expertise and passion for their work was clearly evident, but it also highlighted the power of accessible – and entertaining – science communication.