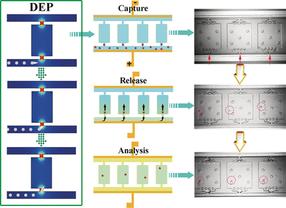 A few little cells that are different from the rest can have a big effect. For example, individual cancer cells may be resistant to a specific chemotherapy—causing a relapse in a patient who would otherwise be cured. In the journal Angewandte Chemie, scientists have now introduced a microfluidics-based chip for the manipulation and subsequent nucleic-acid analysis of individual cells. The technique uses local electric fields to highly efficiently “trap” the cells (dielectrophoresis).

Molecular analyses of individual cells are necessary to better understand the role of heterogenous cell populations in the development of diseases and to develop effective therapies for personalized medicine. Identifying individual cells in a mass of other cells is an enormous challenge in diagnostic medicine. The cells must be sorted, held, transferred into another container with an extremely small volume (< 1 µL) and then must undergo molecular analysis. Conventional methods are usually very time consuming and complex, as well as unreliable and inefficient. They can also compromise the viability of the cells, require large sample volumes, have a high risk of contamination, and/or require expensive instruments.

Scientists from the University of Washington (Seattle, USA), Iowa State University (Ames, USA), and Fred Hutchinson Cancer Research Center (Seattle, USA) have used microfluidic technology to overcome these problems. All of the necessary steps occur reliably on a specially developed microchip using minimal amounts of solvent and without requiring the cells to be marked. In contrast to conventional microfluidic chips, this one requires neither complex fabrication technology nor components like valves or agitators.

The Self-Digitization Dielectrophoretic (SD-DEP) chip is about the size of a coin and has two parallel microchannels (50 µm deep x 35 µm wide x 3.2 cm long) connected by numerous tiny little chambers. The openings of the microchannels are only 15 µm wide. A thin electrode is stretched along the length of the channels. The channels and chambers are filled with a buffer, an alternating voltage is applied, and the sample is added to one of the microchannels. The team headed by Robbyn K. Anand and Daniel T. Chiu used leukemia cells in their experiments.

Local maxima of the electric field occur at the narrow entrances to the chambers. Cells that enter the chambers are “trapped”. Because the dimensions of the entrance are similar to the average size of a cell, only a single cell can be trapped by each chamber entrance. When the alternating current is switched off and the flow rate is increased by injection of the reagents required for subsequent analysis, the cells are washed into the chambers. An oil is then added to seal the chambers. The cells are then dissolved, and the nucleic acids are released and multiplied and can be identified as leukemia cells by a marker gene.

In future studies, the researchers hope to use the chip to determine the distribution of genetic mutations that are related to resistance in leukemia cells and thus may cause relapses.