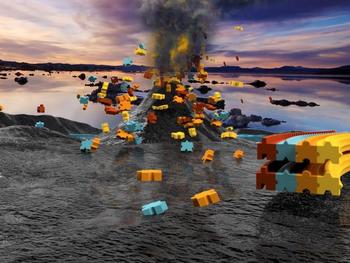 Lakes in volcanic surroundings could have been the breeding ground for the first biochemical compounds around 4 to 4.5 billion years ago.

Long regarded as a biological aberration, amyloids are fibrous aggregates of short protein fragments. Amyloids have a bad reputation because they are thought to be the cause of multiple neurodegenerative diseases, including Alzheimer's, Parkinson's and Creutzfeldt-Jakob disease.

It was only recently that researchers discovered that amyloids appear as structural and functional building blocks in a wide range of life forms, from bacteria, yeast and fungi to humans. In vertebrates, they play a role in the production of the pigment melanin, while yeast cells use amyloid aggregates to form a kind of molecular memory.

Composed of short peptides, amyloid fibres can accelerate chemical reactions in a similar way to enzymes; they have thus been viewed for several years as candidates for the first precursor molecules of life. Until now, however, an important chemical property was lacking in the theory of amyloids role in abiogenesis: self-replication.

Early proponents of the amyloid hypothesis include ETH Professor Roland Riek and his senior assistant Jason Greenwald, from the Laboratory of Physical Chemistry. In an experiment, they have now been able to show that amyloids can serve as a chemical template for the synthesis of short peptides. And the critical point: "This ability also potentially applies to the amyloid itself - meaning the molecules can self-replicate," says Riek.

The ability to self-replicate is regarded as an essential prerequisite for every early form of life. By proving that amyloids self-replicate, Riek and his team have not only highlighted another amazing aspect of this commonly underestimated protein, but also filled in a previously missing link in the amyloid hypothesis' argument.

Almost two years earlier, the ETH scientists had already proven in an experiment that amyloid structures can spontaneously form with astounding ease - from simple amino acids that probably already existed when the Earth was still lifeless, and under reaction conditions that appear very plausible for the primordial soup.

The same is true for the newly discovered peptide synthesis: "The reaction mechanism seems to be of a general nature. It is stable over a wide range of temperatures and salt concentrations, in both acidic and alkaline environments," explains Greenwald.

This discovery strengthens the researchers' opinion that early in evolutionary history, amyloids could have played a central role in the development of early life forms as information carriers and catalytic units.

Not just an RNA world

Until now, however, the most widespread idea for the molecular beginnings of life has been the RNA hypothesis, which sees ribonucleic acid (RNA) as the only key player in the prebiotic primordial soup. This is because, like the genetic material DNA, RNA molecules can code information, and are also able to self-replicate.

The ETH researchers are now picking away at the prevailing dogma of an RNA-based world. They think that the amyloid hypothesis is more plausible; firstly, because RNA molecules with a biological function are much larger and more complex, so they are unlikely to form spontaneously under prebiotic conditions. "Additionally, amyloids are much more stable than early nucleic acid polymers, and they have a much simpler abiotic synthesis route compared to the complexity of known catalytic RNAs," says Greenwald.

Riek adds: "We will never be able to prove which is true - to do so, we would have to turn back the last 4 to 4.5 billion years of evolution. However, we suspect that it was not one, but multiple molecular processes with various predecessor molecules that were involved in the creation of life."