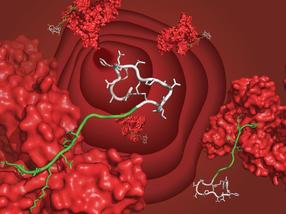 A bicyclic peptide (white) bound to serum albumin (red) through the newly developed ligand (green), floating in the bloodstream.

Peptides are biological molecules, made up of short sequences of amino acids. Because they are easy to synthesize, show low toxicity and high efficiency, peptides such as insulin and other hormones can be used as drugs. But peptides are quickly cleared by the kidneys, which means that we can only use peptide drugs that act within minutes. This problem can be overcome by connecting peptides to ligands that bind blood-serum proteins such as albumin, allowing the peptide to linger in the bloodstream longer. EPFL scientists have now developed such a ligand, which is easy to synthesize and has a high affinity for human albumin. The new ligand could potentially extend the half-life of peptides from minutes to several days.

Peptides combine a number of attractive features for drugs: low toxicity and immune reactions, high affinity and efficacy for their targets, and accessible chemical synthesis. The only problem is "renal clearance": peptides are generally cleared by the kidneys within a few minutes of entering the patient's blood. For example, one of the most common peptides, insulin, has a bloodstream half-life of only 4-6 minutes. Another hormone, oxytocin -- given intravenously to induce or accelerate labor -- has a half-life of 10-15 minutes.

Such short timeframes imposed by renal clearance severely limit the therapeutic potential of these potentially ideal drugs. One promising way to increase the half-life of peptides is to "piggy-back" them onto blood-serum proteins, such as albumin, which is the most abundant protein in the blood serum and has a half-life of nineteen days. This however, requires an intermediate ligand molecule that can be attached to the peptide during synthesis, and also have a high affinity and selectivity for human albumin.

The lab of Christian Heinis at EPFL has now developed such a ligand, which has a high affinity for human albumin and -- more importantly -- is easy to synthesize and attach to a peptide. The ligand is made by fusing a fatty acid with another peptide. The resulting molecule is referred to as a "chimera" and combines the best of two worlds from the field of albumin ligands.

Previous efforts built ligands based on either fatty acids or peptides, and have tried them on insulin. But whereas fatty acids somewhat extended the half-life of insulin, they generally didn't bind albumin very strongly. On the other hand, peptide-based ligands bind albumin well, but showed low solubility, meaning it didn't distribute insulin in the blood very well.

The new ligand literarily brings together the advantages of both fatty acids and peptides. The researchers searched for an amino acid sequence that would complement the fatty acid's weak binding of albumin. Using an elegant "iterative" synthesis and screening method they discovered a peptide sequence that increases the binding of the fatty acid twenty-seven times. The final chimera ligand binds human albumin with high affinity (Kd = 39 nM), is highly soluble, and can be appended to peptide drugs using standard synthesizing techniques.

The researchers demonstrated in vivo that the ligand prolongs the half-life of several bioactive peptides more than 25-fold. They then appended the ligand to an actual peptide developed to treat pathogenic thrombosis, which has a notoriously impractical short half-life. The ligand was shown to extend the effectiveness of the peptide by several hours, inhibiting the disease in rabbits.

"We expect that the tag presented in our work will interest a larger research and business audience because it is applicable to virtually any peptide moiety, including small proteins," says Heinis. "The ligand can be appended to any peptide during solid-phase peptide synthesis on standard synthesizers, making it easily accessible for academic and industry labs."

The innovative technology can potentially also be applied to modulate the pharmacokinetic properties of bicyclic peptides developed by Bicyclic Therapeutics, a startup co-founded by Christian Heinis and Sir Greg Winter (MRC LMB Cambridge, UK) in 2009, and of which EPFL is a shareholder. On June 1 this year, Bicycle Therapeutics received a series B investment of 52 million US dollars. The company's focus is the bicyclic peptide (Bicycle®) product platform, which combines properties of several therapeutic entities in a single modality: exhibiting the affinity and selective pharmacology associated with antibodies; the distribution kinetics of small molecules, allowing rapid tumor penetration; and the "tuneable" pharmacokinetic half-life and renal clearance of peptides.