A glow stick that detects cancer? 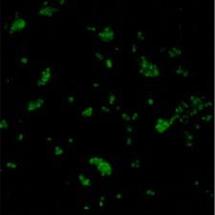 Image generated by the glow stick probe of cancerous cells.

Chemiluminescence, or chemical light, is the principle behind the glow sticks (also known as light sticks) used at rock concerts and as quick tools to grab when the electricity goes out. But they can also be used to diagnose diseases by identifying concentrations of biological samples. A new mechanism developed by Tel Aviv University researchers produces a 3,000-times-brighter, water-resistant chemiluminescent probe with particular application to medical and cancer diagnosis.

The research found that tweaking the electronic structure of current probes improves their inherent fluorescence. This could lead to the invention of a new single-component system with multiple applications -- including the detection and measurement of cellular activity that points to certain pathologies, such as cancer.

"Chemiluminescence is considered one of the most sensitive methods used in diagnostic testing," said Prof. Doron Shabat of TAU's School of Chemistry, who led the research. "We have developed a method to prepare highly efficient compounds that emit light upon contact with a specific protein or chemical. These compounds can be used as molecular probes to detect cancerous cells, among other applications."

The research, conducted in collaboration with Dr. Christoph Bauer of Geneva University, repairs an energy-loss "glitch" in current chemiluminescent probes. Most systems use a mixture of one emitter molecule that detects the species of interest, and another two additional ingredients -- a fluorophore and a soap-like substance called a surfactant -- that amplify the signal to detectable levels. But energy is lost in the transfer process from the emitter molecule to the fluorophore, and surfactants are not biocompatible.

"As synthetic chemists, we knew how to link structure and function," said Prof. Shabat. "By adding two key atoms, we created a much brighter probe than those currently on the market. In addition, this particular molecule is suitable for direct use in cells."

Based on this molecule, the researchers developed sensors to detect several biologically relevant chemicals. They also used the chemiluminescent molecule to measure the activity of several enzymes and to image cells by microscopy.

"This gives us a new powerful methodology with which we can prepare highly efficient chemiluminescence sensors for the detection, imaging and analysis of various cell activities," said Prof. Shabat. The researchers are currently exploring ways of amplifying the chemiluminescence of the new probes for in vivo imaging.