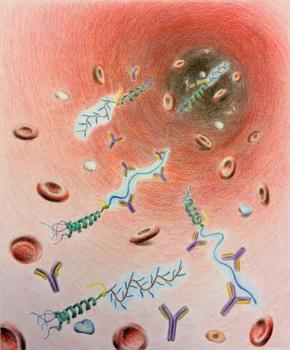 This is an artistic rendering of a new drug delivery system created by Stacey Qi, first author on the paper. The technology updates a popular delivery method that uses polyethylene glycol (PEG) to extend a drug's life by creating a new, shorter version featuring many bristles to avoid PEG antibodies. The drawing depicts troublesome antibodies (purple Ys) attacking the conventional PEG technology while leaving the modified version alone.

Biomedical engineers at Duke University have reconfigured a popular drug-delivery technology to evade immune responses that have halted some clinical trials.

Polyethylene glycol, commonly known as PEG, is a polymer commonly found in commercial products from toothpaste to cosmetics, and also in pharmaceuticals. PEG is used as a thickener, solvent, softener and moisture-carrier, but it can also be attached to active drugs in the bloodstream to slow the body's clearing of them, greatly lengthening the duration of their effects.

The pervasiveness of PEG in daily human life, however, is causing many people to develop antibodies to the polymer. This has led some PEG-modified or "PEGylated" drugs to lose their longevity and has caused allergic reactions, some of which have been life-threatening.

In a new paper, Duke researchers reveal an altered version of PEG that seems to avoid recognition by PEG antibodies already present in individuals. The new technology also shows excellent efficacy, controlling glucose levels in diabetic mice for up to 4 days when used with a drug that, without PEG, treats type 2 diabetes for just six hours.

"This work has been an interesting journey with the unexpected twists and turns that makes research so rewarding," said Ashutosh Chilkoti, the Alan L. Kaganov Professor of Biomedical Engineering and chair of the biomedical engineering department.

"We started down a path to make PEG-like conjugates of protein drugs more efficiently and stumbled into the PEG antigenicity problem," Chilkoti said. "We were lucky to find an expert close at hand in the School of Medicine at Duke. This work was only possible because of the incredible interdisciplinary research culture at Duke that recognizes no boundaries."

The new PEG delivery system was initially developed by Chilkoti and graduate student Yizhi (Stacey) Qi to boost production efficiency. Conventional PEG drug-delivery polymers require labor-intensive synthesis and purification, but the new polymers are grown directly from a defined site on a drug molecule. The new polymer looks a lot like a bottle cleaning brush, with many short segments of ethylene glycol sticking out from a primary backbone.

"Growing the polymer directly on the drug is simpler and more efficient in terms of yield than the conventional process," said Qi, who successfully defended her thesis in August. "The boost in efficiency varies from protein to protein, but our yield is significantly higher and produces more uniform results."

Meanwhile, just a few hundred yards away, a different challenge was being faced by Bruce Sullenger, the Joseph W. and Dorothy W. Beard Professor of Experimental Surgery and director of the Duke Translational Research Institute. During a late-stage clinical trial for an anticoagulant that used PEG to extend its effectiveness, 10 patients had an immediate, anaphylactic immune reaction because of pre-existing PEG antibodies.

The clinical trials were immediately shut down.

"These allergic reactions stopped the development of an otherwise very promising approach to control blood clotting while limiting bleeding," said Sullenger. "Because people with pre-existing PEG antibodies are now present in the population and such antibodies can elicit life-threatening allergic reactions, it has become critical for drug development to create alternative formulations of PEG."

Chilkoti heard about this problem and thought that his lab's new bottle-brush PEG polymer might be a solution. Because each of the molecular chain "bristles" are so short, existing PEG antibodies might not be able to recognize them.

To find out, Chilkoti and Qi turned to Michael Hershfield, professor of medicine and biochemistry at the Duke University School of Medicine. Hershfield has been involved with PEG technology ever since the clinical trials and FDA approval for the very first PEGylated drug in 1990. An immune response to this drug has never been an issue, because its intended recipients are children with deficient immune systems.

A second drug he helped develop in the early 2000s to treat gout, however, has encountered obstacles. About 40 percent of patients develop antibodies to the PEG portion of the drug after the first few doses, leading to allergic reactions and a loss of effectiveness.

On their second try at designing a suitable PEG substitute, the team hit pay dirt. The antibodies left the new compound alone.

Qi then attached her new polymer to a drug used to treat type 2 diabetes and injected it into diabetic mice to see if the system still worked as well. To her delight, there was almost no loss of efficacy, extending the effects of one drug 16-fold.

With this success in hand, the team next plans to test for immunological responses in living animals with preexisting PEG antibodies. They also need to determine whether antibodies will be created against the new polymers.