The birth of the brightest red glowing protein 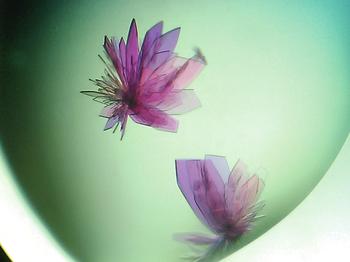 Crystals of mScarlet after having gone through the microseeding technique. 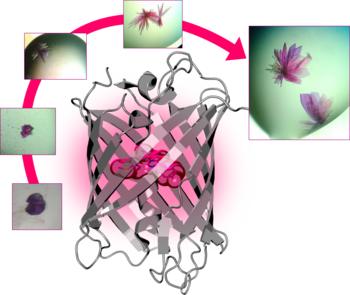 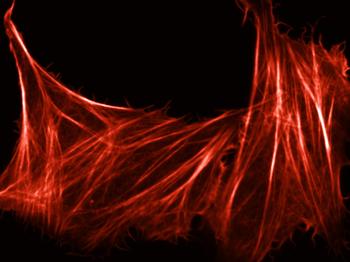 Lindsay Haarbosch (U. of Amsterdam)

Mammalian cell with its actin filaments, forming its cytoskeleton, labelled with mScarlet

The brightest red fluorescent protein ever, mScarlet, has just been engineered by researchers at the University of Amsterdam, the Institut de Biologie Structurale, IBS (CEA/CNRS/University Grenoble Alpes) and the European Synchrotron (ESRF) in France. mScarlet can be used to monitor the activity in cells and replaces its predecessors with unprecedented brightness.

Fluorescent proteins (FP) are widely used in cell imaging as biological markers. They are like highlighters that scientists attach to a protein, in order to trace their movements and interactions in living cells under a microscope. Since the early 1990s, fluorescent proteins have become an important tool in biosciences and have helped the observation of previously invisible processes such as the development of nerve cells in the brain or the spread of cancer cells.

Many research teams around the world try to design and optimise hundreds of FPs with different colours. The more colours they use, the more processes they can track simultaneously. Some of these markers, such as the original green fluorescent protein (GFP), are found in nature (e.g. jellyfish and corals), but many others, such as blue, cyan and yellow variants, have been genetically engineered. In the late 1990s a red fluorescent protein was discovered in corals. However, scientists could not optimize the way it generates bright-red light in the cell – until now.

It has been a long road for the biologists at the University of Amsterdam and the researchers at the IBS and the European synchrotron in Grenoble. After 4 years of research, including a lot of tweaking, they came up with mScarlet, the new protein, which has a record brightness and a fluorescence lifetime of 3.9 nanoseconds. mScarlet will be most probably used by cancer and stem cell researchers, who use fluorescent proteins to track essential cellular processes.

From corals to tracking down activity in cells

The research group, led by Dorus Gadella, Professor of Molecular Cytology at the University of Amsterdam, created mScarlet by comparing the genetic blueprints of a range of red fluorescent proteins from corals. They searched for passages that consistently appeared in the various genetic codes since these appeared to be indispensable. The group attached these essential pieces of code to one another and then had a company synthesise a complete DNA strand. They introduced that DNA into a bacterium, which converted it into a protein.

They assessed the brightness of each protein produced in this way under a microscope that measures the fluorescence lifetime within cells and then tinkered some more with the DNA code, observing how modifications affected the brightness.

Once they had engineered mScarlet, the biologists sent their red creation to the IBS. The structural biology team, led by Antoine Royant, scientific collaborator at the ESRF, first crystallized the protein into purple-coloured, flower-like crystals, using the microseeding technique, which consists of crushing the crystals into very small pieces and recrystallizing them. Then, the researchers went to beamline ID29 of the European Synchrotron (ESRF) to determine the detailed arrangement of the protein. Royant found the key to the brightness of mScarlet: “We discovered that mScarlet’s bright fluorescence is due to the chromophore, the part of the molecule that absorbs light and then emits red, being kept rigidly flat by the way the protein is wrapped around it”.

That brightness of mScarlet will serve cellular microscopy well, as it ensures the visibility of the proteins that scientists study. It is also an ideal illuminating agent as it does not affect the functioning of the proteins to which it is tagged.

The new protein can help scientists around the world to better understand the disruption to cellular processes that results in the runaway cell division found in cancer cells, for example. As Dorus Gadella, professor of the University of Amsterdam and corresponding author, explains: “Just as other people study the stars and prepare future trips to Mars, we are exploring the universe of the proteins that regulate the cellular processes in our bodies.”cy