Sealing leaks in the stomach or intestine 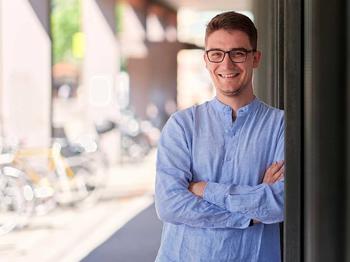 As a Pioneer Fellow, Alexandre Anthis is currently developing a patch that reliably seals sutures on the intestine and stomach.

ETH Pioneer Fellow Alexandre Anthis has developed a patch that seals surgical sutures on the intestines or the stomach. The material designed can also detect any leakage at an early stage – thus preventing serious complications.

For surgeons, stomach reductions and the removal of intestinal tissue have become routine procedures. Yet to this day, doctors are still in the dark about whether the sutures they leave behind in the gastrointestinal tract will hold properly.

As a result, one in ten patients still suffers from complications, such as stomach acid or intestinal contents leaking into the abdomen and causing a serious infection. It is extremely difficult, however, to detect leaking sutures from outside the body; the problem often goes unnoticed until a patient suddenly has a high fever – a sign of blood poisoning.

“The problem of leaking sutures after gastrointestinal surgery hasn’t yet been solved,” says Alexandre Anthis, an ETH Pioneer Fellow. “I would never have thought it would still be an issue, especially in wealthy industrialised countries.”

Anthis, a chemist who holds a doctorate from ETH Zurich, decided to tackle this issue head-​on: he spent his PhD trying to find solutions to this important issue and for almost a year now, has been developing a high-​tech patch that will not only completely seal sutures in intestines and stomachs, but also provide an early indication of whether those sutures are leaking.

Hydrogel patch for the intestines

Anthis’s patch is based on a hydrogel inside which certain chemical sensor elements are embedded. These elements react either to changes in pH caused by escaping gastric acid or to certain enzymes present in the intestine. With the use of a conventional ultrasound device, doctors can easily and non-​invasively check regularly after surgery whether the patch is exhibiting changes or not. Resultingly, a leak could be detected in as little as 15 minutes after exposure to digestive fluid, in sharp contrast to the several days needed in hospitals today.

“The new patch is expected not only to prevent serious complications, but also to massively cut costs throughout the healthcare system. That’s because complications often result in longer stays in intensive care and lengthy recovery times,” Anthis says. He cites figures from the US healthcare market: if postoperative complications occur, patients have to stay in intensive care twice as long. Vascular surgeons in fact already use self-​adhesive patches, based on proteins such as fibrin, but these materials cannot hold out for long against leaking digestive juices. Anthis hopes that “our technology will both protect patients and serve as an important tool for physicians.”

Doctoral thesis as a cornerstone

It was Anthis’s doctoral advisor, Inge Herrmann, Professor of Nanoparticulate Systems at ETH Zurich, who came up with the idea of developing an intestinal patch. Anthis tells how Professor Herrmann and her group maintain a stimulating dialogue with several physicians and surgeons; during one such exchange, the need to reduce complications after gastrointestinal surgeries came up.

Herrmann then tasked Anthis with developing a solution to this problem in his doctoral thesis – a task he accomplished brilliantly. Thanks to his achievement, Anthis was included on the Forbes “30 under 30” list in 2022. Since completing his doctorate a year ago, he has been working to develop the product further and bring it to market. The 150,000 Swiss francs in seed money from the Pioneer Fellowship covers his salary for one and a half years, and Professor Herrmann provides him with a lab, materials and infrastructure.

Anthis has also come up with a name for his future company: Veltist, derived from the Greek word veltistos, meaning a simple but robust solution. His plan is to launch the company in late 2022, or possibly a year later, depending on how the planned trials on pigs go. The gastrointestinal tract in pigs is very similar to that of humans and therefore serves as a good model. These tests will then be followed by the first clinical phase with tests on people.

In other words, Anthis still has plenty of work ahead of him, and his efforts to further develop the patch are not without their challenges. “Ultimately, we want it to break down in the body while still withstanding adverse conditions in the abdomen for as long as possible. At the same time, we don’t want it to activate the immune system,” Anthis explains. It won’t be easy to reconcile all these requirements, but he is undaunted. “I like to play around with different materials and create new things with them, so this is really the perfect job for me at the moment.”

He’s also in contact with a major medical technology company. The problem of post-​op intestinal leaks is a significant one, and the market is correspondingly large. In Switzerland alone, 120,000 people undergo gastrointestinal surgery each year; the worldwide figure is 14 million. “That’s a big market with big potential,” Anthis says – and he is sure he can make the breakthrough.

“I find it very satisfying to develop something that’s genuinely needed,” Anthis says, before immediately adding in a more serious tone: “A project like this requires coordination and hard work on multiple fronts to even have a chance of getting from the lab to the clinic.” But, as he goes on to point out, the reality is that an individual’s hard work may not be enough to get there. So the most important thing for this kind of project is to put together a strong team of great employees.

It’s clear that this project is close to Anthis’s heart. He mentions that he is working hard and putting in long hours at the moment. “Sometimes it’s totally crazy,” he says, laughing, “but we young entrepreneurs live for that pain.”