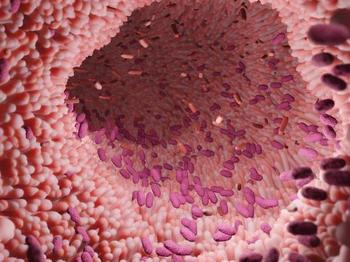 Gut with Firmicutes and Bacteroidetes bacteria.

A calorie-reduced diet can not only delay the development of metabolic diseases, but also has a positive effect on the immune system. Researchers have now shown for the first time that this effect is mediated by an altered gut microbiome*, which slows down the deterioration of the immune system in old age (immune senescence). The study has been published in Microbiome.

Around 2 billion people worldwide are overweight. Obesity increases the risk of developing high blood pressure, heart attack or type 2 diabetes mellitus and can cause inflammation in the body that weakens the immune system through an accumulation of specific memory T and B cells. This process is called immune senescence, an age-related change in the immune system. In obese people, the development of metabolic diseases such as type 2 diabetes can be delayed by a low-calorie diet. In addition, such a diet also has a positive effect on the immune system. But exactly how the positive effects are mediated and what role the gut microbiome plays in this process is not yet known. In a recent study, researchers have now investigated the interactions between calorie-reduced diets, the microbiome, metabolism and the immune system.

For this purpose, they first analyzed how a very low-calorie diet (800 kcal/day for 8 weeks) affected the gut microbiome of an obese woman. In the next step, the researchers transplanted the gut microbiota before and after the diet intervention into germ-free mice to establish a gnotobiotic mouse model. "In this way, we were able to determine the sole effects of the diet-shaped gut microbiome on metabolism and the immune system," said Reiner Jumpertz von Schwartzenberg, last author of the study and a scientist at the Institute of Diabetes Research and Metabolic Diseases of Helmholtz Munich at the University of Tübingen, a partner of the German Center for Diabetes Research (DZD). He led the study together with Hans-Dieter Volk and Joachim Spranger of Charité.

By transplanting the diet-altered microbiota, glucose metabolism improved and fat deposition decreased. In addition, mass cytometry showed that the level of specific memory T and B cells was also reduced. "This indicates delayed immune senescence," said Julia Sbierski-Kind, first author of the study.

"These findings suggest that the positive effects of a low-calorie diet on metabolism and the immune system are mediated via the gut microbiome," Sbierski-Kind said. However, the authors of the study emphasize that the investigation has so far only been conducted with the microbiome of one person and that the experiments will have to be repeated with additional subjects to confirm the results. The new findings could also be interesting for medical practice in the long term. "An improved understanding of the complex interplay between diet, the microbiome and the immune system may set the stage for the development of new microbiome-based therapeutic avenues to treat metabolic and immune diseases," said Jumpertz von Schwartzenberg.

*Gut microbiome: The gut microbiome is the term used to describe the totality of all microorganisms and intestinal bacteria in our digestive tract. Among other things, it influences the immune system and the metabolism of its host.