How do pollutants and other chemicals that we are exposed to affect our health? 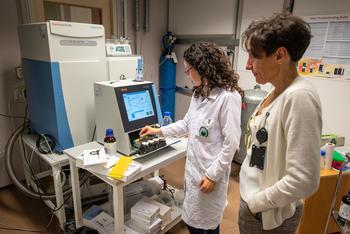 Researchers at LiU study how chemicals and pollutants interact with proteins, to determine at an early stage whether a chemical has biological effects in an organism. They use mass spectrometry to find the specific proteins that interact with the chemicals.

Researchers from Linköping University in Sweden have applied a method to identify the proteins in the body affected by chemicals. The method can be used to discover at an early stage whether a substance has biological effects in an organism.

They are in the water we drink, the food we eat and the environment around us – pollutants. More than 100,000 chemicals are used in manufacturing, agriculture, industry and consumer articles. Each day of our lives we are in contact with chemicals that can be absorbed into our bodies. Some of them can have negative effects on our health. Furthermore, some substances become more harmful when combined with others than individually, a phenomenon known as the “cocktail effect”.

One of the challenges in toxicology in recent decades has been to predict the effects of exposure to mixtures of many different chemicals.

“Levels of pollutants are continuously increasing, and it is extremely difficult to test the effects of all chemicals. It is particularly difficult to test mixtures of substances. I believe that our approach can lead to more efficient use of time and money than traditional methods, which test the effects on one biological mechanism at a time”, says Veronica Lizano-Fallas, PhD student in the Department of Biomedical and Clinical Sciences (BKV) at Linköping University.

The researchers emphasise that the method, which they describe in an article in the Journal of Proteomics, can be used to detect, at an early stage, undesired biological effects of substances. These effects can then be studied in more detail using other methods.

“Chemicals interact with proteins in a fairly promiscuous manner, and we often find that several proteins are influenced by the substances we test. We see that the functions of proteins are affected by their interactions with chemicals, which is consistent with the effects of pollutants and harmful substances in the cell”, says Susana Cristobal, professor in BKV, who has led the study.

The new approach applied by the LiU researchers is based on a technique developed to study pharmaceuticals, proteome integral solubility alteration, abbreviated as “PISA”. The researchers have examined how the method can be used to identify the proteins from an organism that interact with pollutants and other chemicals. Aiming to obtain proteins from all types of cells in an organism, its proteome, the researchers extracted proteins from zebrafish embryos. They mixed the proteome with one or several substances.

The researchers have applied the method on four scenarios: an individual pollutant, a mixture of chemicals, a new bioactive substance, and undesired effects of a new drug. They tested, for example, the effects of a well-studied environmental toxin, TCDD, and identified several proteins affected by TCDD that were not known from previous studies. The results suggest that studying the complete proteome of an organism with this method will allow scientists to find more possible molecular interactions between chemicals and proteins.