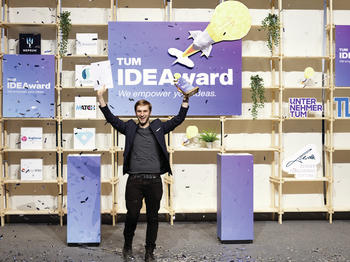 Robin Allert and the QuantumDiamonds team received the TUM IDEAward to advance their start-up.

Diamonds for quantum technology, a test for urinary tract infections and a machine learning method for testing computer games: these three start-ups ideas were announced as winners of the TUM IDEAward. The day also marked the first-ever presentation of the TUM Deep Tech IDEAward, offered to teams established in other countries that wish to launch their start-up in Munich.

Which scientific research has the potential to be turned into successful products? Who has the best idea for a start-up? More than 90 teams from the Technical University of Munich (TUM) applied for this year’s TUM IDEAward. After the finalists presented their ideas to the online audience, the jury selected three winners. The award is granted by TUM, UnternehmerTUM, the Center for Innovation and Business Creation, and the Zeidler Research Foundation, which provides 37,500 Euros in prize money.

A deeper understanding of quantum systems has the potential to generate a wealth of innovations. Experts believe that nitrogen vacancy (NV) pairs in diamonds represent a promising quantum system. The crystal lattice of these diamonds contains point defects in which a nitrogen atom is located near a lattice vacancy. This results in special electromagnetic properties that create the characteristics of a sensor. However, the production of such NV diamonds is a highly complex process that has so far been accomplished only in scientific facilities for research purposes.

Dr. Dominik Bucher and Robin Allert, a scientist and a student at the Chair of Physical Chemistry, are using NV diamonds as sensors in a research project on nuclear magnetic resonance (NMR) spectroscopy, with funding from an ERC Starting Grant. Their group has optimized the production of NV diamonds to the point where they can reliably create high-quality diamonds. The team now wishes to launch a start-up to supply NV diamonds for use in quantum engineering, but also in biology and chemistry. The project is receiving additional support in the TUM Venture Lab Quantum.

Urinary tract infections are among the most common bacterial infections. Until now, relatively sophisticated lab testing has been needed to identify the specific pathogen. In many cases, doctors have initially prescribed unsuitable drugs, including antibiotics. This has promoted resistances.

A team of students and doctoral candidates in the fields of biotechnology, medicine, electrical engineering, management and industrial design has developed a test to identify urinary tract infections pathogens more quickly and cheaply. It can be carried out simply and safely without trained personnel. At the same time, the test determines existing resistances of the bacteria. If the test is carried out by patients, a smartphone app performs the analysis and can send it to a doctor’s practice or clinic. Along with targeted treatments, the process can also be used to create databases to track antibiotic resistance. The team is being supported by Prof. Oliver Hayden, Heinz-Nixdorf Chair of Biomedical Electronics, and physicians at TUM’s university hospital Klinikum rechts der Isar.

When computer game makers want to know whether their creations will be a hit with gamers, they rely on feedback from testers, usually provided after trying out the game. Given the complexity of many games, the players often struggle to recall and report their impressions accurately.

The Brainsight team has developed a technology to generate more objective and detailed data on the emotions of testers. With an electroencephalogram (EEG), it captures gamers’ brain activity while playing. To analyze the measurements, the founders have developed an algorithm trained with machine learning methods. As an application for their idea, they are looking at gamification, i.e. the use of game mechanics in nongame environments such as medical treatment applications. The team is made up of the theoretical particle physics graduate Vladislav Samoilov and Philipp Zent, a student in management and technology.

The TUM Deep Tech IDEAward was presented yesterday for the first time. The new award is part of the Global DeepTech Venture Initiative, launched by TUM and UnternehmerTUM in 2020 to support teams from other countries in creating successful start-ups in the Munich region. The goal of the initiative is to establish the region as Europe’s best deep-tech ecosystem. Along with 40,000 Euros in prize money to work on their start-up, the winning teams will each receive a 10,000 Euros scholarship to support the relocation to Munich.

As global demand for fish continues to grow, most wild stocks are overfished and aquaculture operations are often damaging to the environment. The Koralo team has created a microalgae based alternative that emulates the taste and texture of fish. For this purpose, they have advanced a traditional fermentation technique. Their product is rich in nutrients and is cheaper to produce than fish products. Before setting up operations in Munich, the team was cooperating across borders from locations in Brazil, India and the Netherlands. It will now be part of the TUM Venture Lab Food/Agro/Biotech.

The laboratories and manufacturing facilities in the pharmaceutical, food and biotech industries and many other sectors spend considerable time and effort in collecting and analyzing numerous samples to monitor certain processes, for example to detect bacteria. The Holloid team has developed a microscopy technology for the real-time, 3D analysis of bacteria, algae, yeasts, microplastics and other particles. The technology assembles the captured information in the form of a hologram that can be used to generate concise graphic representations and trigger automatic warnings. The Austrian team is also being funded by the TUM Venture Lab Food/Agro/Biotech.

Digital works of art, especially in the form of non-fungible tokens (NFTs) are transforming the art world. However, many galleries, museums and other institutions are having difficulty in finding their way into this new market segment due to the complexity and technological challenges. To help them, the FARBE team has created a marketing and presentation platform. It will enable users to create digital exhibitions and auctions and to conduct blockchain-based verifications of works of art. This team was also initially set up across multiple countries, including Mexico and Pakistan.