How staphylococci protect themselves against antibiotics 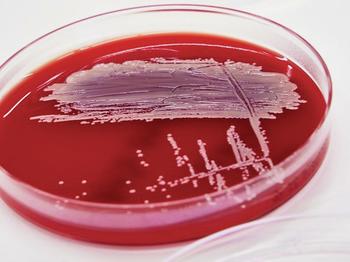 Staphylococcus aureus - here grown on a culture plate - is a skin bacterium that can cause severe wound infections and, moreover, quickly becomes resistant to antibiotics.

The skin bacterium Staphylococcus aureus often develops antibiotic resistance. It can then cause infections that are difficult to treat. Researchers at the University of Bonn have uncovered an ingenious way in which a certain strain of Staphylococcus aureus protects itself against the important antibiotic vancomycin. The results have now been published in the journal Microbiology Spectrum.

In the study, the researchers investigated the development of resistance in a Staphylococcus aureus strain that is innocuous to humans. For this purpose, they grew the strain in the laboratory in nutrient media to which they added successively increasing amounts of vancomycin. Staphylococci are rapidly mutating bacteria. The strain studied also lacks a mechanism that normally repairs these genetic changes. This means it acquires new properties particularly quickly, including those associated with greater tolerance to vancomycin. In the presence of the antibiotic, only these mutants survive.

"This gave us a strain within eight weeks that was able to cope with more than a 100-fold increase in the concentration of the antibiotic," explains Prof. Dr. Gabriele Bierbaum from the Institute of Medical Microbiology, Immunology and Parasitology at the University Hospital Bonn. The researchers now wanted to find out how the strain, with the designation VC40 manages this.

Bacteria are single-celled organisms that are enclosed in a thin membrane of lipids. This is almost as delicate as a soap bubble and the internal pressure of the staphylococcal cell would burst the membrane. The membrane is therefore surrounded by a cell wall, which encloses the bacterium like an extremely robust protective garment. This wall consists of several layers of carbohydrate chains that are cross-linked by peptides, the peptidoglycan. This creates a stable fabric.

Staphylococci and other bacteria produce the basic building blocks of this fabric within the cell and then transport them out through the membrane. The antibiotic vancomycin traps them there and prevents them from being incorporated into the wall. As a result, the cells die.

"Our strain of bacteria has a much thicker wall than normal staphylococci," Bierbaum says. "The cell wall also contains many molecular chains whose ends are barely crosslinked. These non-crosslinked sites can bind vancomycin." The cell wall thus acts like a kind of sponge that absorbs the antibiotic and prevents it from reaching the membrane. At the same time, the bound vancomycin clogs the pores of this sponge and thereby obstructs the path to the membrane.

However, this strategy comes at a price: "The wall is weakened by being less crosslinked," explains Michael Hort, who is a doctoral student in Bierbaum's research group. "It is therefore more easily destroyed by certain enzymes called autolysins." Autolysins are needed by bacteria during reproduction, for example: They cut the cell wall during cell division and ensure that the cells can separate. Even as the cell grows, the molecular scissors keep opening the seams of the protective suit so that new patches of peptidoglycan can be inserted. Autolysins are therefore very important.

However, they pose a threat to bacteria with weakened cell walls. The researchers were able to show how the staphylococcal strain defends itself against this for one of the most important autolysins: S. aureus VC40 modifies a specific component of the cell walls, the wall teichoic acids. These play only a minor role in normal crosslinking and perform other tasks. The S. aureus VC40 strain binds certain sugar molecules to the teichoic acids. This enables them to inhibit the binding of the autolysin to the cell wall. "We generated a daughter strain of S. aureus VC40 that doesn’t incorporate these sugar molecules," Bierbaum says. "This made it almost 20 times more susceptible to vancomycin."

Staphylococci can be found in many places, including on the skin of most people. They are usually harmless there. However, if they enter wounds or the bloodstream, they can cause severe infections. The so-called MRSA strains (the abbreviation stands for "methicillin-resistant Staphylococcus aureus") are often resistant to several antibiotics and, therefore, are difficult to control.

"Our study shows how mutations can complement each other in such a sophisticated way that the strain develops pronounced resistance as a result," explains Gabriele Bierbaum. "In this way, it increases our understanding of the ways in which staphylococci adapt to their environment through spontaneous genetic changes and escape the effects of antibiotics."