The human immune system is an early riser

Scientists show that activation of the immune system oscillates throughout the day, with a peak just before the start of the day 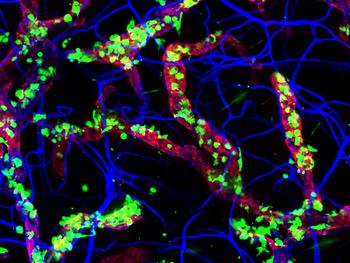 Circadian clocks, which regulate most of the physiological processes of living beings over a rhythm of about 24 hours, are one of the most fundamental biological mechanisms. By deciphering the cell migration mechanisms underlying the immune response, scientists from the University of Geneva (UNIGE), in Switzerland, and the Ludwigs-Maximilians University (LMU), in Germany, have shown that the activation of the immune system is modulated according to the time of day. Indeed, the migration of immune cells from the skin to the lymph nodes oscillates over a 24-hours period. Immune function is highest in the resting phase, just before activity resumes — in the afternoon for mice, which are nocturnal animals, and early morning for humans. These results, which can be read in the journal Nature Immunology, suggest that the time of day should possibly be taken into account when administering vaccines or immunotherapies against cancer, in order to increase their effectiveness.

Unlike the innate immune system, which reacts immediately but in a non-targeted way, the adaptive immune system builds a long-term response specific to each infectious agent.“The adaptive immune system takes weeks to form a response specific to a given pathogen. This response then lasts for a long time thanks to a cellular memory mechanism”, says Christoph Scheiermann, a professor in the Department of Pathology and Immunology and in the Geneva Centre for Inflammation Research (GCIR) at UNIGE Faculty of Medicine, who led this research. “This is typically the mechanism at work during vaccination against a virus, for example.”

To understand the role of circadian rhythms on immune activation, the researchers looked at the migration of dendritic cells from the skin into the lymphatic system, one of the pillars of the adaptive immune response. Located in many peripheral organs, including the skin, dendritic cells migrate through the lymphatic vessels to the lymph nodes, where antigens are presented, in order to trigger an immune response against an incoming pathogen.

The scientists first observed the migratory capacity of dendritic cells in wild mice four times a day, then in mice without functional internal clocks. “For cell migration to take place correctly, not only the dendritic cells but also the lymphatic vessel cells must respond to a circadian rhythm”, explains Stephan Holtkamp, then a researcher at the Biomedical Center of the Ludwig-Maximilian University and first author of this study. The circadian clock must therefore be functional on both sides of the mechanism: in the cell and in its environment. If not, the activity peaks no longer occur and the immune system continuously works in slow motion.

The researchers then repeated their experiment on human skin cells taken from patients at different times of the day. “We identified numerous molecules, in particular chemokines, which are involved in the migratory process and whose expression is regulated by circadian clocks”, says Christoph Scheiermann. “The same molecules were found in human and mouse cells with an inverted rhythm corresponding to the life habits of the two species, nocturnal for rodents, diurnal for humans. This confirms that this rhythm is governed by natural activity according to the alternation of day and night.”

Stimulating the immune system at a favourable time

Additional data also indicate that if the immune system is stimulated at different times of the day, the same oscillations appear, with a peak in the morning. But why is the immune system governed by an oscillatory rhythm? “Circadian rhythms function as an energy-saving system to make the best use of energy resources according to the most immediate needs. Could this be a way for the immune system to be on alert at times when the risk of exposure to pathogens is greatest, through the ingestion of food and/or social interactions?”  Likewise, could we be more vulnerable to pathogens in the evening and at night? It is impossible to say for the moment. Nevertheless, the importance of the circadian rhythm on the immune system is only just being to be revealed and could be of major importance both for preventive vaccination and for the administration of anti-tumour therapies or the management of autoimmune diseases. Christoph Scheiermann’s team will now explore in more detail the very first stage of the immune response, when the pathogen or vaccine enters the body.