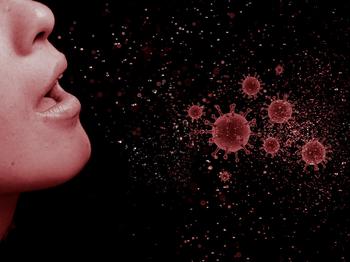 Face masks and social distancing are both well-known ways to keep airborne pathogens, like COVID-19, at bay, but University of Central Florida researchers Michael Kinzel and Kareem Ahmed are working on a possible new one —a combination of food products that alters people’s saliva.

The concept is based on new work from the researchers showing that food product ingredients can be used to thicken and reduce a person’s saliva, thus decreasing the transmission potential of airborne pathogens. The results were published recently in the journal Nature Scientific Reports.

“This is a new concept in the context of source control,” says study co-author Kinzel, an assistant professor in UCF’s Department of Mechanical and Aerospace Engineering. “There are obviously masks, but this is the first research focusing on what comes out of one’s buccal cavity or mouth.”

The work builds on the Kinzel and Ahmed’s previous studies examining the effectiveness of masks in the classroom, features that could make someone a super spreader, and initial studies of food ingredients to control airborne disease transmission. Ahmed is an associate professor in UCF’s Department of Mechanical and Aerospace Engineering.

“The group has researched droplet formation for years,” Kinzel says. “When we heard sneezes transported aerosols over 27 feet early in the pandemic, we realized that this has to be small aerosols, similar to what you see in a misting nozzle. Our thinking has been let’s focus on altering those droplets such that they fall to the ground and not travel so far.”

For the study, the researchers examined characteristics of saliva, such as thickness and amount, and their influence on how far droplets and aerosols from a human’s sneeze travel, which are factors related to airborne pathogen transmission.

The researchers found that ginger reduced the amount of saliva expelled from a sneeze by more than 80% and was as effective as a mask in reducing the distance of droplets and aerosols from a sneeze.

A neck gaiter combined with a surgical mask was the type of mask used in the study.

The findings suggest that certain food products can be tailored to both thicken and reduce saliva emitted to reduce airborne disease transmission. This can also be used in combination with a mask, or without as the impact of the pandemic changes, and could perhaps allow for increased capacity, Kinzel says.

One such product could be a chocolate to deliver the saliva changing compound, the researcher says.

“Much like vitamin gummies, this would not be a candy, but rather a form to deliver the solution,” he says. “It could perhaps be referred to as a ‘chocaceutical.’”