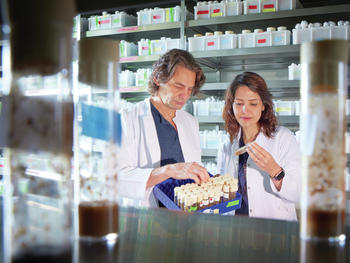 Researchers at the University of Bonn have identified a previously unknown genetic program in the fruit fly. The genetic material involved controls the development of the neurons while also protecting them from degeneration. They have hardly changed in the course of evolution over hundreds of millions of years and also exist in a comparable form in humans. Initial data show that they presumably perform similar tasks there. The results may therefore also provide a starting point for new active ingredients for neurodegenerative diseases. They are published in the journal Neuron.

A fruit fly’s brain is barely larger than the dot on this i, yet nevertheless consists of around 100,000 neurons. There are almost a million times as many neurons in the human brain. And the other differences between the two thinking organs are also considerable – after all, the paths of Drosophila melanogaster (as the species is known by its scientific name) and Homo sapiens separated several hundred millions of years ago during evolution.

There are nevertheless astounding parallels between the two organisms. The current study has now discovered another of them. The research group led by Prof. Dietmar Schmucker from the LIMES Institute at the University of Bonn investigated what function certain genetic material in the fruit fly plays in the development of its brain. “We specifically switched off individual genes and observed how the neurons changed as a result,” explains Schmucker, who is holding a Humboldt Professorship in Bonn since 2019. “During this, we came upon a gene called WNK, which performs an incredible dual role.”

The crucial discovery was made by the lead author of the study, Dr. Azadeh Izadifar, a postdoctoral student in Schmucker’s working group. She was able to show that WNK is necessary for connecting the neurons during the development of the nervous system. If the gene is not present, for instance, due to an experimentally induced mutation, then the branching of the axons does not take place. These axons are cable-like cell offshoots that transmit electrical signals to other neurons. They are usually connected to many different receptor cells via synapses. “Without the WNK protein, functional axonal branches are largely absent,” emphasizes Izadifar.

In adult animals, however, WNK appears to protect existing axons. If the genetic material is switched off at this late time, the branches degenerate in the adult animals. “Both functions may be two sides of the same coin,” presumes Schmucker. This is because WNK appears to be part of a regulatory network that controls both the formation during development and also the degeneration of neuron connections in adult animals. The gene contains the blueprint for what is known as a kinase. This refers to an enzyme that “glues” certain chemical components to other proteins, thus controlling their activity. The WNK kinase regulates and supports a factor called NMNAT, which protects the neurons. At the same time, it inhibits at least two other proteins called Sarm and Axed. It is known that they both play an important role in the active neurodegeneration of axons.

Important balance between protection and degeneration

However, the kinase may not be directly involved in these opposing processes. It fine-tunes an as-yet-unknown parameter and thus adjusts the balance between protection and degeneration. Both processes are essential for the function of the brain.

These results may offer new impetus for the understanding of how neurodegenerative diseases occur in humans and how they could possibly be treated. This is because WNK kinases also exist in mammals – in mice as well as in us. Not only that, they also appear to be essential for protecting our neurons, too. The results of a collaboration with the research group led by Prof. Franck Polleux at Columbia University in New York at least point in this direction. The team was able to show that WNK kinases are also important for the formation of axonal branches in mice and that their loss leads to the degeneration of axons. “It is also known that certain WNK mutations in humans lead to nerve damage, called peripheral neuropathy, which is accompanied by progressive sensory disorders in the arms and legs,” explains Schmucker.

Schmucker hopes that the WNK kinase may perhaps be of therapeutic use in the fight against neurodegenerative diseases – such as by being overactivated using an active ingredient, thus increasing its ability to protect neurons. The study also demonstrates the far-reaching insights that can be gained from simple organisms such as the fruit fly. Schmucker’s research group is now using a second model system – the western clawed frog Xenopus tropicalis. As a vertebrate, it is more similar to humans than the fly is. Xenopus tadpoles are also more or less transparent. The effects of certain genetic manipulations on growth and degeneration of neurons can thus be observed in the living animal.