Hope in the fight against cancer: They build proteins that are not known to nature

Basel-​based biotech startup has big ideas for the future: it aims to take protein engineering into a new era 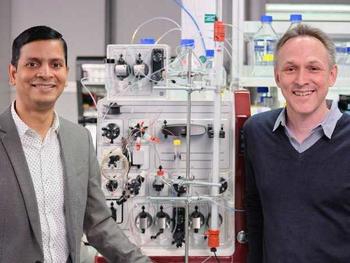 Jeff Bode (r.) and Vijaya Pattabiraman are planning the next big development step. They have just been awarded further funding that will allow them to expand the company.

Using chemical synthesis, Bright Peak Therapeutics can produce proteins that have never before existed. This holds great potential for cancer immunotherapy. The Basel-​based spin-​off has its beginnings at ETH Zurich.

Jeffrey Bode’s long, bold journey began over an after-​work beer in Tokyo. A biologist friend said to the then postdoc, “You chemists say you can make everything. But if I want a protein, I always have to ask a bacterium for it.” Twenty years later, Bode is a professor of synthetic chemistry at ETH Zurich. If you ask him what inspired him to take that route, he tells you about this experience in Japan. “I realised that chemistry’s abilities were limited.” He decided to do something about that. “I wanted to push the boundaries of chemical synthesis and improve on natural proteins.”

Bode started a project that has kept him busy since then, and will continue to do so far into the future: a new technology for the construction of proteins. Now, after two decades of research, he is on the verge of fulfilling an aspiration that most chemists can only dream of – to be there when a molecule produced by him and his team finds its way into hospitals – as a promising candidate for the treatment of cancer.

But let’s start at the beginning. Three years ago, Bode co-​founded the start-​up Bright Peak Therapeutics with his long time team member Vijaya Pattabiraman. They got their business off the ground with start-​up financing, as well as expertise in biology and business development, from the investment firm Versant Ventures. After promising results from seed funding, Versant invested 35 million francs. Today, around 15 researchers work for Bright Peak in its laboratories in Basel as well as offices in San Diego. The company just announced a $107 million Series B financing and plans to further expand in Basel and move into the clinic.

After all, the Basel-​based biotech company has big ideas for the future: it aims to take protein engineering into a new era. To this end, it is using chemical synthesis to construct – from the ground up – variants of natural proteins that are more suitable as therapeutic agents. The goal is to develop medications.

This work relies on a technology platform that Bode and his team at ETH Zurich have built over many years. Their platform makes it possible to modify proteins at will. Unlike recombinant protein production, there is no limit to their interventions. “We can change molecules as many times as we need to: once, five times or even a hundred times,” Bode says: “We can adjust every single atom.” What makes this possible is KAHA ligation: a process discovered by Bode for the synthesis of peptides, which are chains of amino acids.

Hope in the fight against cancer

This new technology offers virtually limitless possibilities. Initially, Bright Peak is focusing on what are known as cytokines, which are proteins that regulate cell growth and differentiation. “Cytokines are very potent and – unlike antibiotics, for example – they usually carry out several biological activities simultaneously,” Bode explains. Using synthetic chemistry, Bright Peak can force them to focus just one task, such as making them promising candidates in cancer immunotherapy.

Three years after its launch, Bright Peak already has some successes under its belt. Several of the molecules it has designed have the potential to become new drugs – most notably a modified version of the cytokine interleukin-​2 (IL-​2). “We plan to start clinical trials with this new molecule in the next year or two,” Bode says. The protein is currently in mass production – a particularly satisfying accomplishment. “Never before has such a sophisticated molecule been mass produced,” says Pattabiraman, Bright Peak’s Senior Vice President and Head of Technology. “It takes over 300 chemical steps.”

The signs are good that in a few years a drug that originated in Bright Peak’s laboratories will actually come onto the market. However, Bode explains, the journey from the lab into hospitals is not only long but sometimes arduous, too. In 2012, the project was almost abandoned. “At the time, we simply couldn’t find a way to combine individual peptides into larger structures using our method. Whenever we tried, the key chemical reactants fell apart.”

Finally, a co-​worker found a stabile building block that was successful for almost everything. He had experimented with a molecule to which he added a single carbon atom. “A single atom can completely change a molecule’s behaviour,” Bode says. “That’s what’s fascinating, but at the same time sometimes frustrating, about our profession.” So sometimes it also takes a bit of luck to make a breakthrough –  or intuition. That’s what Bode’s research colleague Pattabiraman puts it down to: “You have a feeling that something ought to work, but there’s no way of knowing for sure. Then you go to the lab, and you fail and fail and fail again. Until finally, one day it works.”