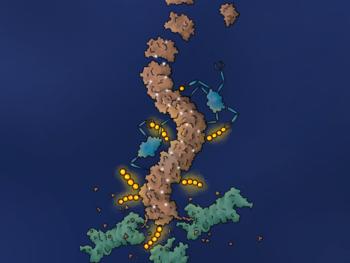 The study shows how a small molecule can inactivate cancer-causing proteins by inducing the formation of long protein chains - a polymerization.

“Molecular glue degraders” are a new class of cancer drugs, which “glue” cancer growth-promoting proteins directly to the molecular machinery of a cell’s disposal system, leading to the subsequent degradation of the cancer-driving proteins and anti-tumor activity. Scientists from Heidelberg and USA have now deciphered another mechanism whereby a small molecule can degrade a cancer protein. This drug binds to the lymphoma-driving protein BCL6, and induces BCL6 self-polymerization, which then attracts the cell's disposal system, leading to BCL6 degradation and the death of the cancer cell. The research results open up new paths in drug development for the treatment of cancer.

Most targeted cancer drugs used clinically are small molecules that inhibit the activity of growth-promoting proteins. In recent years, many such cancer-promoting proteins have been identified. However, of all known cancer drivers, only a few offer suitable targets for these drugs. A central challenge for cancer research is therefore the search for new therapeutic approaches. "Molecular glue degraders" hold promise to expand the repertoire of cancer targets. This class of the drugs induce interactions between a protein and components of the cellular waste disposal system. The best-known drug of this type is Lenalidomide, which is approved in Germany for the treatment of certain types of blood cancer, including multiple myeloma and myelodysplastic syndrome.

Researchers at the German Cancer Research Center (DKFZ), the National Center for Tumor Diseases (NCT) in Heidelberg, the Broad Institute of MIT and Harvard University in Cambridge, and the Dana-Farber Cancer Institute in Boston have now uncovered another mechanism of a drug molecule from the group of "molecular glue degraders." The increased occurrence of BCL6 in a cell is involved in the development of a certain form of lymph gland cancer, which makes BCL6 a suitable candidate for targeted drugs. In the search for a BCL6 inhibitor, the pharmaceutical company Boehringer Ingelheim has identified a small molecule that binds to BCL6 and induces the degradation of BCL6, so that the lymphoma cells die.

"To track what happens to BCL6 after treatment with the degrader, we labeled BCL6 and observed the appearance of BCL6-containing foci under the microscope within minutes of treatment, followed by their disappearance, presumably caused by protein degradation" explains Jonas Koeppel, one of the study's lead authors. „This sequence of events hinted at a drug mechanism that involved BCL6 self-interactions," adds co-author Lena Nitsch.

A crucial discovery in the elucidation of the mechanism was the fact that BCL6 formed long fibers, so-called helical protein filaments, when treated with the new substance. Research led by Hojong Yoon, a PhD student at Harvard Medical School and the Dana-Farber Cancer Institute, resolved the molecular structure of the helical filaments using the scientific method of cryo electron microscopy. The structure showed that the drug binds to a groove on the BCL6 protein and then triggers an interaction with a second, neighboring BCL6 protein. In this way, the novel drug molecule “glues” individual BCL6 molecules together in the filament structure. This is referred to as polymerization.

"This is the first study that demonstrates how a small molecule can inactivate cancer-causing proteins by inducing polymerization and subsequent proteasomal degradation," says Mikolaj Slabicki, lead author of the study. The ultimate goal is to identify more small molecules that work through a similar mechanism and to learn principles to design compounds that would target other dysregulated proteins.”

"I am incredibly proud that young scientists in our department - Mikolaj Slabicki, Jonas Koeppel and Lena Nitsch - have succeeded in making such a fundamental discovery, and I am pleased to be part of this transatlantic collaboration," said Stefan Fröhling, Head of the Department of Translational Medical Oncology at DKFZ, Managing Director of the NCT Heidelberg and co-author of the study.