In winter the virus has a good chance of survival outside 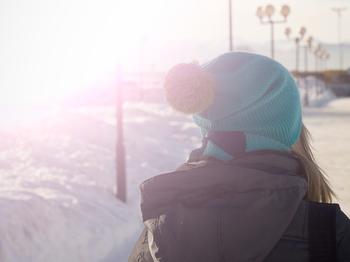 The SARS-CoV-2 virus that causes COVID-19 poses a threat to human health both indoors and outdoors. Besides direct infection from respiratory droplets and aerosols, another mode of transmission involves airborne viruses that linger in the air before settling on and contaminating surfaces. A recently published study by Vetmeduni Vienna has now revealed the extent to which solar UV radiation is effective against SARS-CoV-2 outdoors.

Solar ultraviolet radiation (UVR) is known to act as a natural environmental virucide. The virucidal effectivity of UVR depends primarily on the sensitivity of the virus against UVR as well as on the amount of incoming UVR. An international research team led by study director Alois Schmalwieser from the Institute of Physiology and Biophysics at Vetmeduni Vienna estimated the potential of solar UVR in inactivating SARS-CoV-2 in the environment.

The researchers combined satellite data on DNA-damaging UVR with available information on the impact of fluence (the radiant energy received) on coronavirus inactivation. Schmalwieser: “Our results show that solar UV radiation has a high potential to inactivate coronaviruses, but the degree depends strongly on location and season. In the subtropics, for example in São Paulo at 23.5°S, the daily survival fraction is lower than 10−4, i.e. ten-thousandths of all coronaviruses, during the whole year. In Reykjavik at 64°N, such a reduction can be found in June and July only. But even in Iceland, the solar UV radiation is able to inactivate 90% within 30–100 minutes in summer, with complete sterilization within a day.”

Spring, summer and autumn keep the virus in check outdoors

The study results suggest that solar UV radiation in spring, summer and autumn is the most important natural limiting factor for the survival of the virus outdoors, as more than 90% of the viruses are inactivated in less time than other natural environmental factors such as surface type, air temperature and humidity can do. However, UV radiation presumably has only minor effects on the direct viral transfer from person to person in air, as this can occur within minutes. “Our estimates show, however, that viruses remaining in the air or adhering at surfaces are clearly affected by solar UV radiation,” says Alois Schmalwieser.

In winter the virus has a good chance of survival outside

Besides geographic and atmospheric ozone, other factors such as topography and cloudiness also play a very important role in the distribution of UV radiation and, consequently, in the inactivation and survival of SARS-CoV-2. Based on the data for December 2019, daily solar irradiation would not be sufficient to reach a level of sterilization across the European continent in the last month of the year. According to the researchers, this may enable the coronavirus to survive long enough outdoors to stay infective for several hours or even over whole days. This is quite different to the situation in mid-April 2020, after the first peak of the pandemic in Europe, when the sterilization of SARS-CoV-2 through solar UV radiation was quite high.

UV radiation is generally lower and the survivability of coronavirus significantly higher in the shade. Glass windows block most of the solar UV-B radiation (280 nm–315 nm) and therefore inhibit the virucidal effectiveness of sunlight. Schmalwieser concludes: “We hope that these data can be a contribution to complementary studies on the role of solar UV radiation in reducing the contagiousness of contaminated surfaces and that it can act as an additional tool for individual and collective protection, especially during a possible second or further wave, in order to minimize the risk of contagiousness through individual and collective protective measures.”