When immune cells aren’t in their senses 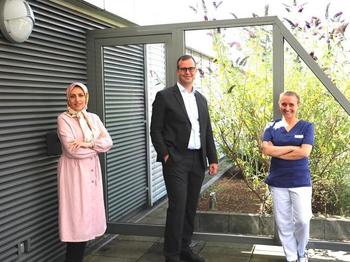 One of the human immune system’s most importantand impressive features is its ability to reliably distinguish self from non-self. Invading pathogens, infected or malignant cells have to be eliminated while protecting healthy cells. To date, many aspects of this fine-tuned regulation have remained enigmatic. A new study has now discovered a fundamental and previously unknown regulator of this process. An inherited mutation affecting the WAVE regulatory complex revealed that the molecule HEM1 –a protein responsible for the dynamic architecture of the so-termed actin cytoskeleton -is critical for properimmune cell sensing, leading to severe autoimmunity in HEM1-deficient patients. This discovery highlights a new mechanism underlying autoimmunity in humans, and provides a potential target for development of therapies for both autoimmune conditions and cancer. The work has been published in the renowned scientific journal Science Immunology.

Under the leadership of Kaan Boztug, Scientific Director of the St. Anna Children’s Cancer Research Institute (CCRI), scientists from the Ludwig Boltzmann Institute for Rare and Undiagnosed Diseases (LBI-RUD), CeMM Research Center for Molecular Medicine of the Austrian Academy of Sciences, and the Medical University of Vienna and St. Anna Children’s Hospital, together with collaboration partners from Tehran, Braunschweig, and the Institute of Science and Technology Austria, identified this novel mechanism of disease.

The starting point of the study were two sisters presenting with recurrent fever, infections, and severe autoimmunity from early age–essentially a disease of unknown origin. “Using exome sequencing, we identified a homozygous loss-of-function mutation in the gene encoding for HEM1, which has never been described in humans. We therefore embarked on a quest to understand how loss of HEM1 may cause the disease,” explains Samaneh Zoghi, co-first author of the study. “Until now, the precise function of HEM1 in the immune cell development was unknown. We used modern technology including so-called single-cell RNA sequencing to understand how loss of HEM1 causes severely disturbed development of B lymphocytes – and hence autoimmunity” adds Elisabeth Salzer, co-first author of the study. The researchers found that absence of functional HEM1 protein destabilizes the WAVE regulatory complex, thus – during their development – shifting the cell fate towards survival of autoreactive B lymphocytes. This discovery is a major step forward in understanding how loss of balance in the immune system and autoimmunity may occur. “Normally, immune cells produce multiple flexible protrusions, which depend on the actin cytoskeleton, to constantly scan the environment. Here we could demonstrate how the abnormal cell shape affects signaling intensity in B cells such that normal function of the immune system is abrogatedand cells reacting against self,cause severe disease. This is an impressive example of how such ‘experiments of nature’ can teach fundamental biological principles to us”, explains senior author Kaan Boztug.

To date diagnosis and treatment of inborn errors of immunity remains a challenge. By investigating a previously unknown inborn error of immunity, the researchers uncovered HEM1 as a key regulator of B lymphocyte signaling strength that is crucial for cell development and homeostasis. Given the tight interplay between normal immune system function, immune dysregulation, and cancer predisposition, the researchers will now further explore HEM1 and related proteins as potential targets in both autoimmunity and cancer.