The invisibility cloak of a fungus 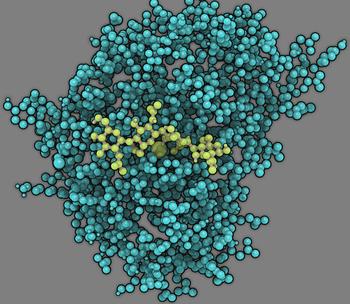 While viruses and bacteria regularly manage to infect the human organism, fungi only very rarely succeed. The reason for this is that the human immune system can recognize them very easily because their cells are surrounded by a solid cell wall of chitin and other complex sugars. Chitin is, so to speak, the alarm signal for our immune system, to which it reacts with a whole arsenal of defensive weapons. Some fungi, however, have apparently learned to avoid this fatal recognition: They possess one or more enzymes called chitin deacetylase, which they use to alter some of the chitin building blocks. This produces a chitosan, which is invisible to the immune system.

A particularly aggressive fungus, Cryptococcus neoformans, which can easily lead to a fatal infection, particularly in immunocompromised patients, has four genes that appear to encode such enzymes. So far, however, it had only been possible to show that three of them really are chitin deacetylases. The function of the fourth protein was unknown. Researchers at the University of Münster have now examined this fourth enzyme in detail. They found that this enzyme is a chitosan deacetylase which has not been described before.

Chitin is a polysaccharide, i.e. a giant molecule consisting of thousands of individual sugars that are strung together like a string of pearls. It plays the same role in fungal cell walls as the better known cellulose in the cell walls of plants. In contrast to cellulose, which is made up of the single sugar glucose, chitin consists of N-acetylglucosamine units, i.e. a more complex single sugar that carries a basic amino group and, attached to it, an acetic acid molecule. The enzyme chitin deacetylase removes some of the acetic acid molecules in the chitin chain, but not all of them, resulting in chitosan as a product. Chitosans thus consists of two different simple sugars, the chitin building block N-acetylglucosamine and the chitosan building block glucosamine.

Researchers led by Prof. Dr. Bruno Moerschbacher from the Institute of Plant Biology and Biotechnology at Münster University developed biotechnological methods to introduce such genes into the bacterium E. coli, and to characterise the enzymes produced by these bacteria in detail. Using modern mass spectrometry, they sequenced the products of these enzymes, i.e. decoded the sequence of chitin and chitosan building blocks. They were then able to analyse the bioactivities of the products and thus understand the relationships between their structures on the one hand and their functions on the other.

"Apparently the chitin deacetylases need several chitin building blocks next to each other in the chain in order to attack the molecule and remove an acetic acid," explains biochemist Bruno Moerschbacher. "This is why at the end, there are always some chitin building blocks left. The new chitosan deacetylase can then also remove these last acetic acid molecules". The suspicion was obvious that only this last step makes the fungus really invisible for the human immune system. And indeed: in cooperation with dermatologists from the University Medical Center Hamburg-Eppendorf, the researchers succeeded in showing that a chitosan that still carries many acetic acid molecules, stimulates the immune system even more strongly than chitin. Only treatment with chitosan deacetylase leads to a product that no longer activates the immune system.

The chitosan deacetylase is thus a crucial tool of the fungus to attack its host under the chitin radar of its immune system. The complete removal of the acetic acid molecules from the chitin acts like a kind of invisibility cloak, making the fungus invisible to the immune system. "This makes chitosan deacetylase an interesting target for new drugs," comments Dr. Christian Gorzelanny from the University Medical Center Hamburg-Eppendorf, who previously worked in Bruno Moerschbacher's research group at Münster University. Lea Hembach, PhD student in Münster and first author of the study, adds: "A fungicide based on an inhibitor that specifically inhibits this enzyme would not be harmful to humans or other organisms at all, since they do not have such a rare enzyme".

In a new project led by the bioinformatician Dr. Ratna Singh, the Münster researchers are already looking for such an inhibitor. Bruno Moerschbacher also hopes that his research group will succeed in developing a particularly strong immunostimulatory "designer" chitosan.