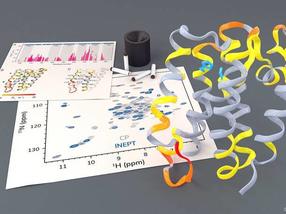 Investigation of the rhomboid protease GlpG by solid-state NMR.

Rhomboid proteases are clinically relevant membrane proteins that play a key role in various diseases. Using solid-state NMR spectroscopy, researchers from Berlin’s Leibniz-Forschungsinstitut für Molekulare Pharmakologie (FMP) have now been able to watch rhomboid proteases in a native lipid environment at work. The obtained dynamic images will be useful for the development of new medication for diseases such as Parkinson’s and malaria.

Tens of thousands of proteins are at work in our cells, around the clock. Some of these industrious workers sit in the cell membrane, among them the family of rhomboid proteases. Given that these intramembrane proteases are involved in many biological processes, and also play a key role in diseases such as Parkinson’s, diabetes, cancer and malaria, they are highly clinically relevant.

Previously, it had been possible to view rhomboid proteases using X-ray crystallography. However, this method was only able to provide static images from proteins in an artificial environment. Therefore it remained of great interest to see what happens in the cell membrane where the proteins go about their main task, which is cleaving other membrane proteins, triggering a signaling cascade.

The long-suspected gate that opens does in fact exist

The research group led by Professor Adam Lange from the Leibniz-Forschungsinstitut für Molekulare Pharmakologie (FMP) has now been able to investigate this highly complex process, for the first time using solid-state NMR spectroscopy in a native-like environment. The researchers were able to observe how certain parts of the protease move. They also noticed that, in order to cleave other proteins, a gate opens briefly to let these substrate proteins enter the active center of the protease.

The project, undertaken within the UniSysCat Cluster of Excellence, sets a base for an even better characterization of rhomboid proteases. What is more: The knowledge gained will be useful for researchers to investigate how they can pharmacologically influence the clinically relevant membrane proteins. Also Lange and his team now want to search for substances to inhibit errant rhomboid proteases.