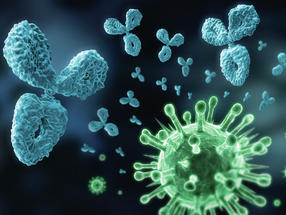 Illustration of antibodies fending off viruses

New influenza vaccines are required every autumn, because the viruses constantly change the components to which our immune protection responds. Medical research is focusing on universal vaccines that target more stable parts of the viruses. This new generation of broadly neutralising antibodies is particularly important for controlling life-threatening viral infections such as influenza, HIV or hepatitis. Researchers at BRICS (Braunschweig Integrated Centre of Systems Biology), a joint facility of the Helmholtz Centre for Infection Research (HZI) and the Technische Universität Braunschweig, used computer simulations to identify new strategies that promote the natural formation of broadly neutralising antibodies in lymph nodes. Discovering this new selection mechanism calls into question the theory of “original antigenic sin”, and could be used in the future to design and test innovative therapies and vaccination protocols.

Broadly neutralising antibodies attack multiple strains of a pathogen, neutralise its effect and thus support the immune system, and have already been identified for HIV or influenza viruses, for example. Their special feature is that they bind to conserved molecular structures of the viruses that do not change much, while the pathogen continues to mutate in the organism. This makes them extremely interesting for the development of universal vaccines.

Prof Michael Meyer-Hermann, head of the “Systems Immunology” department at the HZI, used computer simulations to analyse how these rare antibodies could be induced more specifically in natural immune reactions. “Broadly neutralising antibodies are naturally produced by very few people, but the principles are not yet fully understood. We want to better understand the underlying mechanisms in order to be able to use measures to promote the natural production of broadly neutralising antibodies in all people,” says Meyer-Hermann.

Together with his team, Meyer-Hermann had already shown in earlier computer studies how special immune cells, called B cells, form optimised antibodies for warding off pathogens. They are the only cells in the body that can actively mutate their genetic material (DNA = deoxyribonucleic acid) in order to produce new antibodies as customised weapons of the immune system. These B cells undergo a strict selection process in certain regions of the lymph nodes – called germinal centres – during which they multiply, mutate and then modify the antibodies they produce. In an ideal scenario, the optimisation cycle ultimately results in antibodies that can optimally bind to certain structures of pathogens, called antigen epitopes, and neutralise them effectively.

“According to the theory of ‘original antigenic sin’, during repeated or chronic infections, B cells produce antibodies exclusively against epitopes that our body recognises from previous infections. The result is always the same immune response when the pathogen reappears or is still present, despite further mutation in their variable region,” says Meyer-Hermann. That is why broadly neutralising antibodies only rarely develop in natural immune responses. In order to form new, optimised antibodies, the B cells would have to return to the germinal centres of the lymph nodes, as a type of training camp, and specialise in new or mutated epitopes.

In his new mathematical model, Michael Meyer-Hermann differentiates between dominantly presented epitopes on the surface of the viruses, and low accessible epitopes that are more “hidden” deeper inside the pathogen. Antibodies that bind to the latter epitopes are the coveted broadly neutralising antibodies. Based on his simulation results, Michael Meyer-Hermann suggests a feedback inhibition in the germinal centres: “First of all, B cells always produce the antibodies that bind to the epitopes of the pathogens that are very dominantly presented on the surface. Only once these are covered do other B cells have any chance of producing less common broadly neutralising antibodies that can bind to the hidden and conserved epitopes of the virus,” he says.

The simulations show that, in the case of a repeated or prolonged infection, memory B cells from previous immune responses produce antibodies that bind to dominantly presented viral epitopes, thus preventing their own participation in the re-training in the germinal centre. “This clears the way for B cells that can concentrate on the low accessible epitopes and explains why some individuals produce the broadly neutralising antibodies,” says Meyer-Hermann. According to the simulations, however, the self-suppression of memory cells usually comes too late, and therefore all B cells die with the potential to bind to the hidden epitopes. Meyer-Hermann proposes shifting the formation of B cells to the hidden epitopes by injecting antibodies against dominant epitopes.

Identifying how broadly neutralising “super antibodies” against low accessible or hidden viral components are selected in the germinal centres questions the theory of “original antigenic sin”, according to which the antibodies are only formed during re-infection against epitopes that were already present in the virus during the first infection. “The newly discovered feedback mechanism shows that the immune system tends to solve new problems rather than to optimise already found solutions for old problems. This understanding could significantly influence the development of universal vaccines in the future,” says Michael Meyer-Hermann.