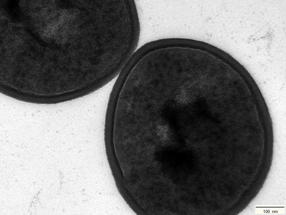 An international research team from the Vetmeduni Vienna discovered a new mechanism for persistence of the bacterial pathogen Staphylococcus aureus (S. aureus). This finding is of great relevance as S. aureus is not only the best known, but also one of the most dangerous multidrug-resistant hospital germs for humans. This new bacterial route to persistence has been first described in a dairy cow with a long-lasting, chronic udder infection with implications for animal welfare, food safety and milk yield.

Staphylococci are common bacteria of the human and animal skin. A problematic species is S. aureus, which can be harmful for humans, but can also be a major cause of infections of the udder in dairy cows (bovine mastitis). Frequent consequences are long-lasting and recurrent infections during which the bacteria constantly refine its properties and adapt to the host.

In a recent study at the Vetmeduni Vienna, funded by the Austrian Science Fund (FWF), an international team of researchers led by Tom Grunert investigated the adaptation of S. aureus within the host animal over the course of three months in a naturally infected dairy cow with chronic, subclinical mastitis. The analysis of the bacterial genomes revealed a complete replacement of the original bacterial strain by another genetic variant – caused by an adaptation through mutation and selection.

This study was the first to observe a genetic and phenotypical adaptation of S. aureus within its bovine host. Helene Marbach from the Unit of Functional Microbiology at Vetmeduni Vienna: “The mutation in the bacterial genome involves in particular only a single base exchange in a gene. The newly evolved clone exhibits strong changes in infection-relevant phenotypes, such as higher proteolytic activity and biofilm formation.” The researchers were thus able to demonstrate a new, alternative mechanism for persistence of S. aureus leading away from intracellular towards extracellular persistence.