New method for quicker and simpler production of lipidated proteins 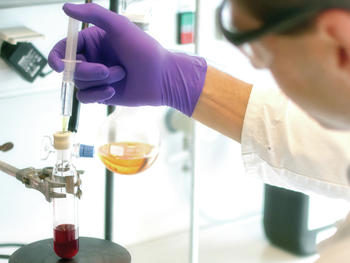 In the Journal of the American Chemical Society, researchers from Graz University of Technology and University of Vienna present a new method for the production of lipid proteins. Compared to established methods, this method impresses with its simplicity in implementation and its flexibility in application.

Some of the body’s proteins are not just made up of amino acids, they are also ‘decorated’ with lipid chains, which significantly influence the biological functions of the protein. An example is the Ras protein, which plays a role in the development of many types of cancers and is only active and cancer-causing if it is able to bind to the cell membrane with the help of a ‘lipid anchor’.

Fundamental research as a basis for medical progress

Gaining a better understanding of these processes in the human body can greatly accelerate the development of new medicines and cancer therapies. However, the methods of investigation employed up to now have proven very time-consuming and costly. Rolf Breinbauer from TU Graz’s Institute of Organic Chemistry and Christian Becker from the Institute of Biological Chemistry at the University of Vienna have come up with a much simpler and direct method of introducing lipids into protein, which they recently published in the Journal of the American Chemical Society (JACS).

A noble metal for protein modification

The researchers used the noble metal palladium as a catalyst for attaching lipids to proteins. BIPHEPHOS a type of ligand, plays a crucial role in the process, explains Breinbauer: “We tested a total of 50 different ligands. BIPHEPHOS was kind of the ‘missing link’. It has the selectivity needed for palladium to facilitate the lipidation of the sulphurous amino acid cysteine.”

Protein chemist Christian Becker applied what they had learned to proteins, with equally successful results: “The outstanding selectivity of the new catalyst and the robust reaction facilitate the rapid modification of numerous cysteine-containing peptides and proteins for use in biomedical research.”

Decorating proteins with pharmaceuticals and other molecules for targeted delivery into the body and for keeping them active is an approach commonly used in medicine today. The method developed by Breinbauer and Becker could now be used to accurately and efficiently introduce such molecules into proteins. Breinbauer is confident that their method will soon be adopted because “the reagents we used are very easy to manufacture or can be purchased.”