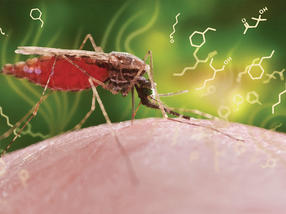 The malaria pathogen alters the odour profile of an infected person, making it more attractive to the pathogen-transmitting Anopheles mosquito.

ETH researchers have discovered odour profiles typical of people infected with acute or asymptomatic malaria. This is a first promising step towards a low-cost diagnostic test that can be used in the field in developing countries.

Malaria is still a deadly disease in tropical and subtropical regions. Every year the disease infects more than 200 million people worldwide, claiming several hundred thousand victims. Children are particularly vulnerable, with 90 percent of the victims under the age of five, according to the World Health Organization (WHO). Not only can malaria kill people, but it also impairs survivors’ quality of life and is a significant hindrance to economic development in the countries where it is prevalent.

In many cases, however, the infected host carries the pathogen without presenting any external symptoms. “These are precisely the people we need to target in order to stop the disease spreading,” says Consuelo De Moraes, Professor of Biocommunication & Entomology at ETH Zurich.

But how do you identify infected people with no external symptoms? Possibly by recognizing changes their odours – as demonstrated by the ETH professor and her colleagues in a paper just published in the journal Proceedings of the National Academy of Sciences. Working with collaborators at the International Centre for Insect Physiology and Ecology in Nairobi, these researchers examined volatile chemicals released from the skin of Kenyan children and identified characteristic patterns for both acute and asymptomatic malaria infections.

In a previous study with mice, these researchers had demonstrated that changes in odours associated with malaria make infected individuals more attractive to mosquito vectors, which transmit the disease from one individual to another. “Based on our previous work we had reason to hope that similar changes in human odours might provide biomarkers that could be used for diagnosis,” De Moraes explains.

To pursue their theory, the ETH scientists collected samples of volatile substances released from the skin of more than 400 Kenyan school children. This experiment involved placing a child’s foot or arm into sealed Teflon bag and passing an air current over the skin for about one hour. The air was then channelled through special filters that collected the volatile compounds. Using gas chromatography and mass spectrometry, the scientists then determined the identity and quantity of each compound to generate odour profiles for infected and healthy children.

Further analysis of these profiles identified volatile biomarkers that enabled the researchers to clearly identify whether a child is infected with the malaria parasite. In addition, the odour profiles were found to be significantly different in the case of acute and asymptomatic infections. The researchers were able to detect the pathogen extremely reliably even when it was only present in minute quantities and was not yet observable under the microscope. Even for asymptomatic infections, the detection rate in the study was close to one hundred percent.

“This high detection rate was encouraging,” says De Moraes, who was also surprised by the considerable differences found in the profiles of individuals with acute and asymptomatic malaria infections. “Initially we weren’t sure which chemical compounds we should be looking for,” explains the ETH professor. The body releases many different compounds from the skin that vary according to food intake, metabolism or illness. “The specific signature is not created by the presence or absence of specific compounds, but through a change in the concentrations of compounds that are also present in healthy people. Our task was to filter out the right signals from the extensive background noise.”

The researchers hope that the biomarkers they have identified may be suitable for developing a relatively simple diagnostic tool that can be used in the field for the early detection of malaria. Methods such as Polymerase Chain Reaction (PCR), a DNA analysis technique, already exist for identifying malaria pathogens at an early stage. However, they are relatively expensive and require laboratory facilities, which makes their widespread use challenging, particularly in the poorer countries of the southern hemisphere.

“These new volatile biomarkers are an important first step. Now someone needs to develop an application that can be used cheaply and reliably in the field,” says Mark Mescher, an ETH Professor in the Institute of Integrative Biology who also worked on the project. The researchers hope to contribute to the development of such an application through continued partnership with the Bill and Melinda Gates Foundation, which provided some of the funding for this research.

These ETH researchers also hope that similar methods might be effective in combatting other diseases. “We know that vector-borne pathogens often cause changes in the odours of infected individuals that influence vector behaviour,” says Mescher, “which may create a chemical signature of infection that can be harnessed for diagnosis.”