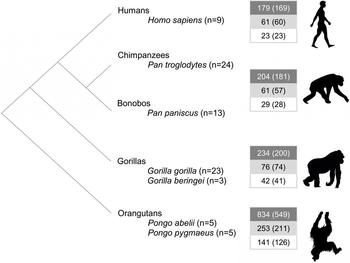 These are the great ape individuals and miRNAs changes analyzed in this study. Boxes indicate the number of species-specific nucleotide substitutions along the great ape phylogeny since the split with humans (or with chimpanzees in the case of humans), in the precursor (dark grey), mature (light grey) and seed (white) miRNA regions. Total number of miRNAs in which these changes occur is shown in brackets. No species-specific nucleotide substitutions were considered for bonobo (Pan paniscus) due to the low quality genome annotation in this group may underestimate the real number of species-specific substitutions in the rest of the groups, and for gorillas (Gorilla beringei) due to the low number of individuals that are representative of this population.

Human-specific variants of four microRNAs may have altered expression levels and gene targets compared to other great apes, according to a study by Alicia Gallego from the Institute of Evolutionary Biology, Spain, and colleagues.

MicroRNAs are post-transcriptional gene regulators known to be involved in almost every biological function. They are highly conserved among species and, while some differences exist, the effect of the variations is often unclear. The authors of the present study analysed over 1500 microRNAs to identify variations between humans and other great ape species, including orangutans, gorillas, bonobos and chimpanzees, and the possible effect of these variations on function.

The authors found that changes in the sequence and length of four microRNAs may be specific to humans. Two were highly expressed in brain tissue and may exert effects on genes with neural functions, while two exhibit restricted expression patterns that the authors posited implied a role in development. The authors also found that "age" might matter; in an evolutionary sense, "younger" microRNAs had less sequence conservation, expression and disease association, and were more isolated than "older" microRNAs.

The authors suggest this study may aid in our understanding of how non-coding elements may have played a role in shaping some traits that ultimately became human-specific. They also hope that it provides a framework to study the possible impact of these changes on recent human evolution.