“This new method lets us obtain information directly from the gut, without having to disturb intestinal functions” 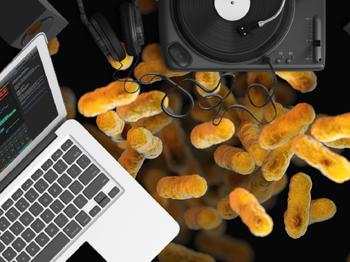 Researchers from ETH Zurich, University Hospital of Bern and the University of Bern have equipped gut bacteria with data logger functionality as a way of monitoring which genes are active in the bacteria. These microorganisms could one day offer a noninvasive means of diagnosing disease or assessing the impact of a diet on health.

Our gut is home to countless bacteria, which help us to digest food. But what exactly do the microorganisms do inside the body? Which enzymes do they produce, and when? And how do the bacteria metabolise health-​promoting foods that help us avoid disease?

To obtain answers to such questions, researchers at the Department of Biosystems Science and Engineering at ETH Zurich in Basel modified bacteria such that they function as data loggers for information on gene activity. Together with scientists from University Hospital of Bern and the University of Bern, they have now tested these bacteria in mice. This is an important step towards using sensor bacteria in medicine in the future for applications such as diagnosing malnutrition and understanding which diets are good for an individual.

The data logger function was developed over the past few years by researchers led by Randall Platt, Professor of Biological Engineering at ETH Zurich. To do this, they employed the CRISPR-​Cas mechanism, which is a type of immune system present naturally in many bacterial species. If the bacteria are attacked by viruses, they can incorporate snippets of the viral DNA or RNA into a section of their own genome called the CRISPR array. This lets the bacteria “remember” viruses with which they have had contact, allowing them to fight off a future viral attack with greater speed.

To put this mechanism to use as a data logger, the researchers didn’t concern themselves with DNA snippets of viral intruders, but focused on something else: the mechanism can be exploited such that the bacteria incorporate snippets of their own messenger RNA (mRNA) into the CRISPR array. mRNA molecules are the blueprint that cells use to manufacture proteins. As such, mRNA snippets can reveal which genes are being used to build proteins for executing cellular functions.

To make the method effective, the scientists introduced the CRISPR array of the bacterial species Fusicatenibacter saccharivorans into a strain of the intestinal bacterium Escherichia coli, which is regarded as safe in humans and available as a probiotic. The transfer included the blueprint of an enzyme called reverse transcriptase, which is able to transcribe RNA into DNA. This enzyme also transcribes the information in the mRNA into DNA form, which along with accompanying CRISPR-​associated proteins is necessary for incorporating the DNA snippet into the CRISPR array.

Obtaining information without disturbing the body

Next, researchers from University Hospital of Bern and the University of Bern, led by Andrew Macpherson, administered these modified gut bacteria to mice in the lab. They collected faecal samples from the animals and isolated the bacterial DNA, which they then analysed using high-​throughput DNA sequencing. With a subsequent bioinformatic evaluation, performed and assessed in collaboration, they were able to work through the mass of data and reconstruct the genetic information of the mRNA snippets. This allowed the scientists to determine by noninvasive means how often the gut bacteria manufactured a given mRNA molecule during their time in the body, and thus which genes are active.

“This new method lets us obtain information directly from the gut, without having to disturb intestinal functions,” says Andrew Macpherson, Professor and Director of Gastroenterology at University Hospital Bern. As such, the method has major advantages over endoscopies, which can be unpleasant for patients and always involves disturbing intestinal function, as the bowels need to be empty for the examination.

“Bacteria are very good at registering environmental conditions and adapting their metabolism to new circumstances such as dietary changes,” Macpherson says. In experiments with mice that were given different foods, the researchers were able to show how the bacteria adapted their metabolism to the respective nutrient supply. A report of the findings has been published in the latest issue of the journal Sciencecall_made.

The researchers would like to further develop the method, so that one day they can study human patients to see how diet influences the gut ecosystem and how this affects health. In the future, they hope to use the method to determine the dietary status of children or adults. Armed with this information, doctors will be able to diagnose malnutrition or decide whether a patient needs nutritional supplements.

In addition, the researchers were able to recognise inflammatory responses in the gut. The researchers administered the sensor bacteria to mice with intestinal inflammation as well as to healthy mice. In this way, they could identify the specific mRNA profile of gut bacteria that switch to inflammation mode.

The current research published in the journal Science includes a scientific development that enables the researchers to distinguish two strains of bacteria from each other based on individual genetic “barcodes”. In the future, this will make it possible to investigate in laboratory animals the function of gene mutations in bacteria. This will enable scientists to compare the mRNA profile of different bacteria, such as normal compared to mutant bacteria. Thanks to the molecular data logger, it is possible for the first time to determine this profile, as they pass through the intestine not just when the bacteria reach the feces, so that the information shows what was happening when the bacteria were still living in the gut.

Another conceivable avenue would be to further develop the system to distinguish RNA profiles of bacteria in the small and large intestine. In addition, the data logger function could be incorporated into other types of bacteria. This would open the door to applications in environmental monitoring. An analysis of soil bacteria from a crop field, for example, would establish whether herbicides had been used.

The researchers have filed patent applications for the method itself and for the characteristic RNA profiles that are signatures of certain nutritional molecules and indicators of intestinal health.

Before the sensor bacteria can be used outside the lab – including in human patients – the scientists still have to clarify various safety and legal questions, as the bacteria have been genetically modified. “In principle, there are ways of using live genetically engineered microorganisms as diagnostic or therapeutic agents in medicine, provided that certain conditions are fulfilled,” Platt explains. It is possible, for instance, to modify the sensor bacteria so that they need certain nutrients and therefore can survive only inside the gut of a patient. As soon as these particular bacteria leave the gut, they will die. Integrating suitable safety mechanisms is the next step towards application of the method in medicine.