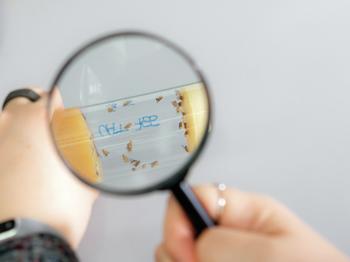 When genes mutate, this can lead to severe diseases of the human nervous system. Researchers at Leipzig University and the University of Würzburg have now used fruit flies to demonstrate how, apart from the negative effect, the mutation of a neuronal gene can have a positive effect – namely higher IQ in humans. They have published the discovery in the prestigious journal “Brain”.

Synapses are the contact points in the brain via which nerve cells ‘talk’ to each other. Disturbances in this communication lead to diseases of the nervous system, since altered synaptic proteins, for example, can impair this complex molecular mechanism. This can result in mild symptoms, but also very severe disabilities in those affected.

The interest of the two neurobiologists Professor Tobias Langenhan and Professor Manfred Heckmann, from Leipzig and Würzburg respectively, was aroused when they read in a scientific publication about a mutation that damages a synaptic protein. At first, the affected patients attracted scientists’ attention because the mutation caused them to go blind. However, doctors then noticed that the patients were also of above-average intelligence. “It’s very rare for a mutation to lead to improvement rather than loss of function,” says Langenhan, professor and holder of a chair at the Rudolf Schönheimer Institute of Biochemistry at the Faculty of Medicine.

The two neurobiologists from Leipzig and Würzburg have been using fruit flies to analyse synaptic functions for many years. “Our research project was designed to insert the patients’ mutation into the corresponding gene in the fly and use techniques such as electrophysiology to test what then happens to the synapses. It was our assumption that the mutation makes patients so clever because it improves communication between the neurons which involve the injured protein,” explains Langenhan. “Of course, you can’t conduct these measurements on the synapses in the brains of human patients. You have to use animal models for that.”

First, the scientists, together with researchers from Oxford, showed that the fly protein called RIM looks molecularly identical to that of humans. This was essential in order to be able to study the changes in the human brain in the fly. In the next step, the neurobiologists inserted mutations into the fly genome that looked exactly as they did in the diseased people. They then took electrophysiological measurements of synaptic activity. “We actually observed that the animals with the mutation showed a much increased transmission of information at the synapses. This amazing effect on the fly synapses is probably found in the same or a similar way in human patients, and could explain their increased cognitive performance, but also their blindness,” concludes Professor Langenhan.

The scientists also found out how the increased transmission at the synapses occurs: the molecular components in the transmitting nerve cell that trigger the synaptic impulses move closer together as a result of the mutation effect and lead to increased release of neurotransmitters. A novel method, super-resolution microscopy, was one of the techniques used in the study. “This gives us a tool to look at and even count individual molecules and confirms that the molecules in the firing cell are closer together than they normally are,” says Professor Langenhan, who was also assisted in the study by Professor Hartmut Schmidt’s research group from the Carl Ludwig Institute in Leipzig.

“The project beautifully demonstrates how an extraordinary model animal like the fruit fly can be used to gain a very deep understanding of human brain disease. The animals are genetically highly similar to humans. It is estimated that 75 per cent of the genes involving disease in humans are also found in the fruit fly,” explains Professor Langenhan, pointing to further research on the topic at the Faculty of Medicine: “We have started several joint projects with human geneticists, pathologists and the team of the Integrated Research and Treatment Center (IFB) AdiposityDiseases; based at Leipzig University Hospital, they are studying developmental brain disorders, the development of malignant tumours and obesity. Here, too, we will insert disease-causing mutations into the fruit fly to replicate and better understand human disease.”