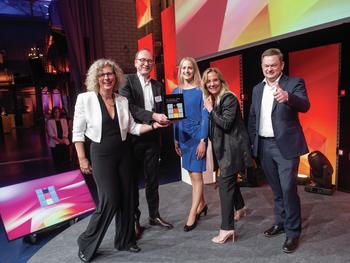 The German Innovation Award 2022 was presented in Munich on April 29. A large number of research-intensive companies had applied for the prestigious award, which is presented annually by WirtschaftsWoche.

The jury, it was reported, had a hard time choosing, as only three companies from Germany were to receive the coveted prize for their forward-looking product innovations. For each of the three categories, startups, SMEs and large companies, three finalists traveled to Munich for the festive, grand awards ceremony. The nine teams were very excited and had butterflies in their stomachs, because it had been kept top secret until the last moment which three companies would be awarded.

KNAUER made the running in the medium-sized company category: Team leader Daniela Fehr, department head Anja Roden and managing directors Alexandra Knauer and Carsten Losch were beaming when they were allowed on stage. Chief editor Beat Balzli of WirtschaftsWoche was impressed by the short time in which KNAUER had designed and manufactured novel large-scale plants for the encapsulation of mRNA at its own risk. Equipment for the production of millions of mRNA vaccine doses had never been manufactured by any company before.

Mr. Balzli asked the team on stage why this project was made at KNAUER and given top priority. Company owner Alexandra Knauer replied, "We all agreed. We wanted to do our part to save the world from COVID-19."

More than two billion vaccine doses have now been produced worldwide using KNAUER equipment. Managing Director Carsten Losch reported how this very special development project began and that the expertise of the employees and the high added value at KNAUER were factors in its success. Anja Roden informed that KNAUER's decades of experience in high-pressure pump technology and mixing technology were important prerequisites for the quick implementation. Recently, the portfolio was expanded to include screening and the production of smaller quantities of lipid nanoparticles for personalized therapies.

The Berlin-based medium-sized company KNAUER is delighted to receive this special award in the anniversary year "60 years of KNAUER". Laudator and WirtschaftsWoche editor-in-chief Beat Balzli described medium-sized businesses as the secret backbone of the German economy. At the end of a company visit to KNAUER, Dr. Angela Merkel called the company a "pearl of the SME sector" in September 2021.